As I made my way to the front of the crowd, a girl beside me threw her head from side to side and screamed into my ear “If you’re not sweating, you’re not doing it right!!” That statement pretty much sums up the The Harpoonist & the Axe Murderer show Saturday night at Distrikt nightclub. Shawn “the Harpoonist” Hall and Matt “the Axe Murderer” Rogers have an infectious stage performance and an even more incredible sound. 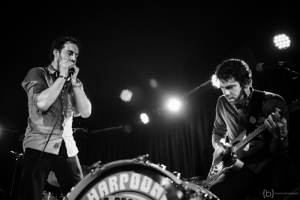 It was impossible not to stomp your feet along to the beat of the drum and groove to the sexy sound of the harmonica. Their folk and blues vibes (mixed with a little bit of honky tonk for good measure) flooded the club and I watched the crowd become increasingly rowdy as they sang along to every song. If I didn’t know any better, I would have thought there was a full band jamming on stage. And as luck would have it, that dream became reality during the second encore when the opening act, Ben Rogers, joined the boys on stage for a killer rendition of LA Woman. It was an epic night full of boot knocking and foot stomping and I can’t wait to catch these guys on the festy circuit this summer.

Words and Photos By: Breezy Photography