I did this long distance interview last Summer, in between one of my regular landscaping/ farm jobs. I stepped inside, still covered in soil from digging around, and started chatting to Stacey Gonder who was calling from her studio in Toronto. Before I did this interview I had seen some of House SM’s rad custom themed bra tops on Britz Bitz, the Social Media Guru for Shambhala Music Festival, but I didn’t have a clear idea of what the brand was about or it’s origins. I definitely was not prepared for what an incredible vision Stacey had for her company and her sense of integrity for how her clothes are made. She’s been able to produce all of her epic themed costumes IN Canada, sell them at festivals and online, AND still make her business work! She’s the queen of the bejewelled bra and she’s making some of the best rave gear around. 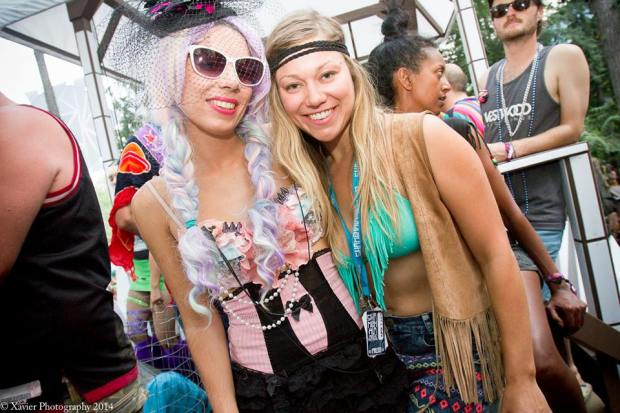 I started out by asking Stacey how she started House SM.

Stacey– Last year was a little crazy! We were just joking around one afternoon, and we were like, we should make rave wear! So we applied to Motion Notion, Bass Coast, Shambhala, World Pride, Comicon and Sexapolooza. Yeah, we did them all! Every time we kept getting an acceptance email, we were super happy, but not expecting it at all! We drove to Motion Notion and did the circuit from there.

I run two different companies, one is House SM and one is custom costuming for competitive dancers. The dance costuming is still fun and sparkly, it’s just really crazy! When it gets crazy busy I bring in friends to help me. Last year when we first started doing it (House SM), we had 0 stock or anything. We didn’t expect to get into any festivals. Then we got into everything we tried for! We were like “aw shit, we gotta sort this out!” So some friends came in, which was awesome. I like it though, because that way I get to give people a job. Not a lot of people get to do what they went to school for or what they really enjoy.

Just to be able to give people jobs within Canada is amazing.

Stacey– Right?! A lot of people ask me why I don’t manufacture overseas, especially for the dance land stuff. And I’m like, there’s such a thing as First World Poverty, you know that right? (laughs). I try to keep (the fabric) on North American soil as much as I can. I try really hard not to go directly overseas. Sometimes it is cost effective, but like we were saying earlier, that’s somebody’s job!

It ain’t easy! Pimpin ain’t easy! (laughs). I guess if you look hard enough, you can find the things that you’re looking for right here at home. It’s cliche, but it’s true. Yeah you might pay a little bit more for it, and yeah it will probably last a little bit longer. I think it’s important for people to know that you’re not just buying a piece of clothing. You’re supporting A) your own economy and B) a person who has a house, or a family or a dog. It’s a bigger picture than just the piece of clothing that you walk away with!

Six people worked for me this year. Those are six people, that whom ever my clients are, they helped contribute to their quality of life. I’m like, “hell yeah!” It makes me work harder so I can do that for other people.

I can definitely relate to that. I worked for a business smaller than yours, but really similar in that we did a lot of custom clothing and a lot of costumes and rave gear in general. I was out of art school, like two years, I was laid off and I was really interested in fashion. So I started working for Lyssa at Lyssa’s Stitchery. Once the EI ran out though, I was like, this isn’t enough to be my regular job. I need to do something on the side! (laughs) It was really the only way it was working. It’s hard to make a clothing business work.

Stacey– Totally. Even just trying to compete with what people perceive as the mass market. You have to really make a choice, that that’s not your goal. People are afraid to buy something that’s unknown to them.

What would you say you’re most known for?

Stacey– I would say themed outfits. A lot of times, people come to us with some kind of crazy idea…like for example, a woman just came to me recently from South Africa, and she wanted to be the human embodiment of a wish for Africa Burn….and I was like, “ok, what?” (laughs).

Her and I got to talking, and I immediately got it. Even though it’s not a specific character, it’s still inspired by. That’s what I would say we do best, and we’re gearing most of the future towards. The words “ish” and “esque” are very prevalent in my vocabulary! We do Comicon here a lot too, and it’s a big hit. The cos play thing is huge.

I feel like that’s bleeding into festival fashion as well! There’s so much anime influenced stuff. Just Japanese style influence in general.

Stacey-Absolutely, Japanese and Korean fashion is like, seeping in! It’s awesome, it’s so great! I love it. The pastel grunge and pastel goth chicks, and Lolita goths and stuff, it’s insane!

What trends do you see catching on this year?

Stacey-There’s just a lot of a fantasy stuff. You know, Game of Thrones and Vikings. Almost a historical vibe to things. There’s always been a section of festival life that has had that. Combining that with the rave-ier side of things. There’s this kind of cross section which I think is really interesting. We preach this all the time about being inclusive and non judgemental. Yet, there’s these weird sub cultures, within a sub culture. So I think it’s really cool, that everything’s beginning to bleed over. Like I just put the words pastel and goth together in a sentence! That in and of itself tells you.

There’s all these hybrids of things. It’s also starting to filter through into ‘everyday life.’ The split or the boundaries between ‘real, everyday life’ and festival life is starting to fade I feel. I don’t think it’s an alternative lifestyle. Like alternative to what? Alternative to whom?! (laughs) So that, I think is a bit of a trend. In terms of mainstream trend, I can’t speak to that. I just don’t pay attention! I don’t live in that world!

I joke with a lot of my friends, because we’re all old and grumpy and we’ve been raving since the 90’s.  We’re like these kids, they don’t know, this and that. And I’m like, guys this is what we always wanted when we were kids. We wanted the music to be recognised legitimately. Now that’s what’s happening, and you don’t like it (laughs).

Stacy definitely has her finger on the pulse of rave fashion. Her clothes are unmistakable, and her work ethic shows in how well represented the brand is. I find it so amazing how she keeps all the production of her clothing on Canadian soil! Not many companies can say that. It’s super hard to make a small clothing business work in North America, and Stacy is absolutely killing it on all fronts! Hope to see a lot more from this mind blowing lady!