You know, there is something about Victoria B.C. Canada that is simply magnificent. If you want to go to a Canadian city with real character, culture, community and charm, your best bet is to attend Rifflandia Festival in 2015 which highlights Victoria in an inclusive and unique way. This festival isn’t simply about the music. Nay, Rifflandia highlights something more. It showcases the city through local artisans, businesses, restaurants, music, venues and pretty much everything else in between. Insert a stacked multi-genre myriad of a lineup – well Rifflandia, you did it again didn’t you… and that deserves a double high kick from us.

Words by Betty. Photos by Betty and Kora!

WRISTBAND CONNECT
The concept is simple but the logistics are a feat: show your wristband and receive deals and discounts at various local businesses. I absolutely adore this concept and also love a good deal! We hopped on our bikes and made pit stops throughout Victoria at local clothing stores, coffee shops and eateries. This is one of the best ways to tour Victoria’s vibrant local business community while enjoying the late summer sun around the Garden City.

LITTLE INDIA
Rolling in Thursday I headed directly to Anian to watch Little India, an alternative rock/indie pop band who recently won the Fox Seeds. There has been a lot of buzz circulating around these guys and there is no doubt why. The packed outdoor venue was transformed from epic surf shop to a shoulder-to-shoulder standing room only showcase of an up-and-coming band that everyone should have on their radar. Great energy on stage with thoughtful lyrics and a tight sound that is as easy to dance to as to put on in your living room – I doubt I will get to see Little India again in a venue this intimate, which makes it all the more magical. I asked drummer Dallyn Hunt what his thoughts were on playing Rifflandia this year, to which he replied “It was so much more than the music this weekend. Having the opportunity to play Rifflandia this year is truly a blessing for our band. Everyone we met was super inspiring and we can’t wait to come back next year.” 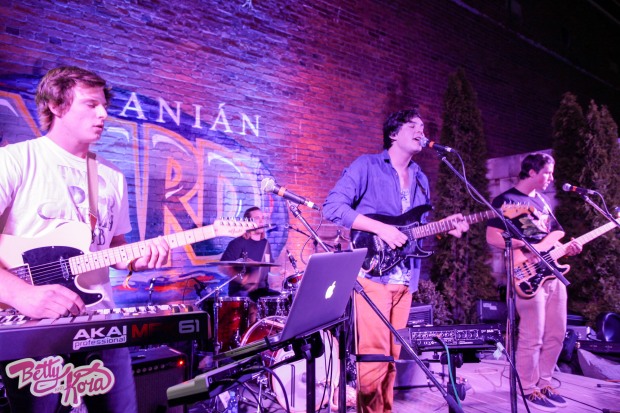 HIP HOP
Top of my list was Danny Brown’s much anticipated performance at Phillips Backyard. Last year Mr. Brown was unfortunately denied entry into Canada for some ‘lame’ reason and did not play Rifflandia in 2013. It wasn’t much of a surprise that Phillips was packed with eager fans awaiting Danny Browns set…postponed from a year ago. I loved that Phillips Backyard was dedicated to hip hop this year…god I love hip hop. Del The Funky Homosapien, Kool Keith, Hill Top Hoods and The Beatnuts were all outstanding. There is definitely a huge Hip Hop scene in Victoria and I’m glad that there was a venue dedicated to it this year.

RIFFLANDIA MAGAZINE
Editor Chris Long and his team should be commended on the Rifflandia Magazine. This is the only urban festival that I’ve attended who put so much detail and love into everything that they do. The magazine is a comprehensive resource that doubles as a collector’s item, directory and interesting coffee table book. Plus, it’s absolutely free!

TWERKING
Love twerking? I know Blondtron does. Thursday night was capped off at Wolfsheep Art House with BnW (Blondtron and Waspy). This was one of my favorite venues by far; integrating a hyper creative art space with music is a genius idea. I also thought Blondtron’s twerking was impressive. Actually there were three girls that did rotations shaking their booty and by the end of the night the stage was taken over by males. Only one guy actually knew what he was doing…the others looked strange and awkward but I’ll give them an A for effort. It was a good night.

TACO JUSTICE
Taco break at Taco Justice. So good. Like more than good…and they serve this Mexican delicacy gluten free, because well, as some of you know, neither of us can eat it. So thank you.

THE GLORIOUS SONS
The Glorious Sons stage presence will knock you on your ass…they were born for rock and roll, and as much hype as there is around the death of rock and roll, it was fairly clear at Rifflandia that this is some well-planned fabricated lie that should be booted out of a window. Rock and roll isn’t going anywhere, especially with bands like The Glorious Sons, Head of the Herd, The Roper Show and Airbourne who all had more than stellar performances this past weekend. 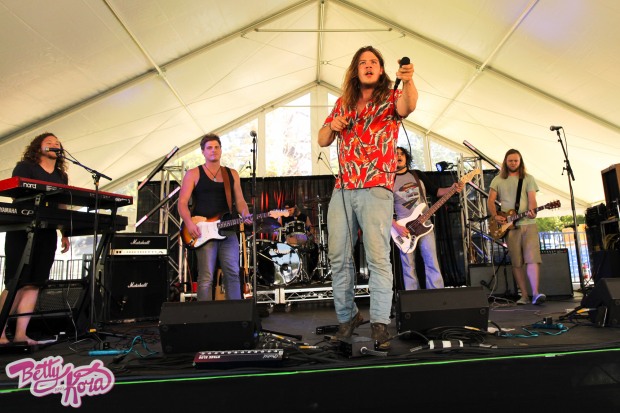 THINKLANDIA
Thinklandia is a place where imagination, ideas, creations and movements take flight. In conjunction with Rifflandia, Thinklandia is a series of interactive workshops and lectures from the best and the brightest innovative thinkers based in Victoria and the surrounding area.

AIRBOURNE
Airbourne with all due respect are gods of rock who were sent down to destroy the stages of earth. When the wine came out after one hell of guitar riff, I thought to myself “this is going to be interesting.” What a scene…guzzling and dumping wine on your face while playing one hell of a rock show, was without a doubt impressive. This performance was way too good and definitely one of the most talked about sets of the festival. Airbourne you have two new fans.

THE BORN RUFFIANS
The Born Ruffians are one of my favorite bands of all time. Their music is creative, sometimes like a poem that you read and you don’t fully understand but love it anyways. I’ve been playing their music on repeat since 2009 and still can’t get enough. The two sets that they played both at Royal Athletic and at Alix Goolden Hall were stunning and I feel incredibly blessed to have seen them twice in one day.

DOUBLING ON A BIKE
Nothing says fun and scraped knees all at the same time like doubling on a bike. It’s a hell of a way to get around though isn’t it?

THE BOOTHS AT ROYAL ATHLETIC PARK
Need a haircut? Head to Victory Barber. Want to colour…or maybe your child would like to create a masterpiece…head over to Kidlandia! We watched in suspense as a handful of shredders ripped up the half pipe at Skatelandia. I love festivals. Especially the ones that offer a variety of things to do for all ages and this is something Rifflandia puts heart and soul into.

THE ROPER SHOW
Did you know that Jesse Roper is actually a rock god disguised as Jesse Roper? I bet you didn’t know that but the cats out of the bag now isn’t it? I love that The Roper Show has intensely dedicated fans. We walked into Wood Hall and I started sweating immediately. The level of crowd excitement was like a 1980’s work out video except to rock music and it warmed my heart. 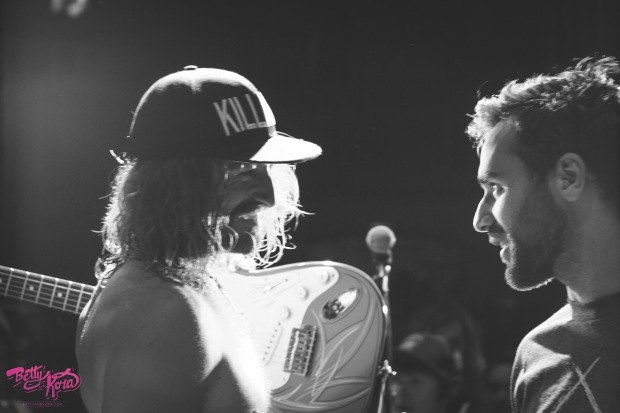 ARTLANDIA
In all honesty, one of my favorite aspects of Rifflandia is the art. Artists ban together to create incredible showcases of local art in the form of poster design, large installations, workshops – all spread throughout the festival. It is truly a visual masterpiece shared and showcased throughout Victoria. Well done! 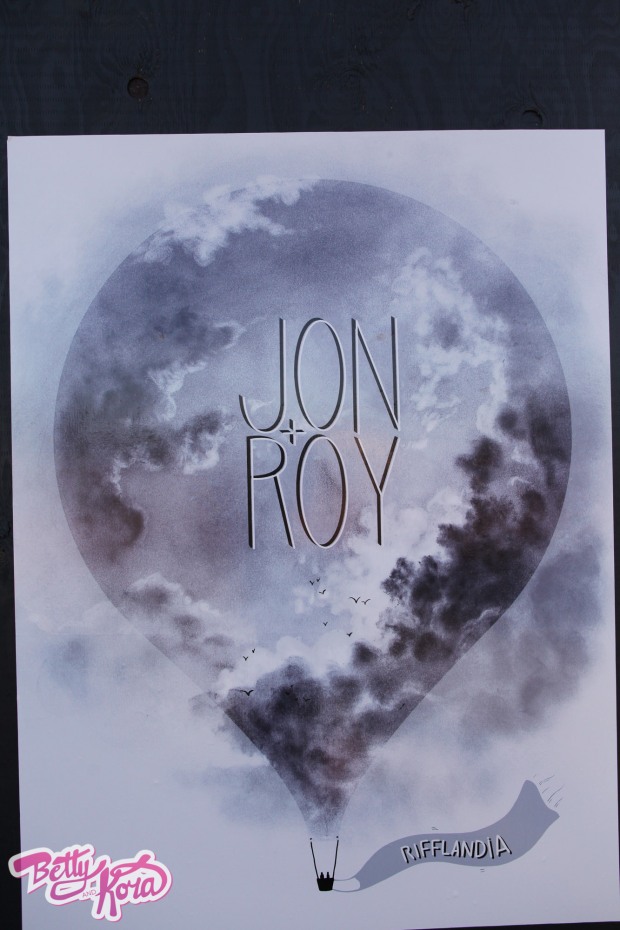 HIGH KICK CONTEST
Yes, we hosted an impromptu high kick contest. Some fell and some succeeded. My favorite was Jeremy Baker from The Zone @91.3 high kicking with his son wrapped in a baby Bjorn. He gets Father of the Year.

RUSKO
I’m going to come out and say that I love Rusko. This is a DJ that I have yet to see with a visual show and he always keeps the crowd captivated. Rusko is genuinely excited to be on stage. He always wears a huge smile and brings the party. The crowd at Royal Athletic Park looked like hyper active kittens playing with a laser pointer and that in my mind is a testament to his music.

DEATH CAB FOR CUTIE
I will follow you into the dark Death Cab. 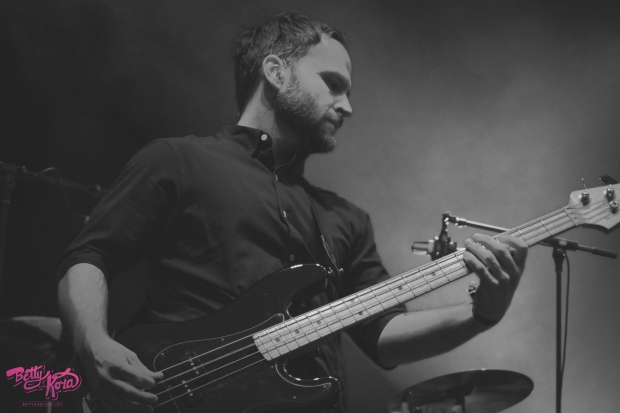 HEAD OF THE HERD
One of the top Canadian blues-rock bands in our opinion, Head Of The Herd pulled out all of the stops on the main stage. I enjoyed when Clay and Neu jumped on top of the speakers playing to an afternoon crowd and when they asked everyone to literally sit, then lay down and then simultaneously jump up again during one of their songs. I hope the guy who caught the tambourine frames the thing…I’m kind of jealous.

Head Of The Herd

PAPER DIAMOND
I’ve heard a lot about Paper Diamond over the past year and was pleasantly surprised to see him on the lineup. He is a seasoned producer who creates energetic and dramatic buildups with intensity, and his set at Market Square was one for the books. My friends and I couldn’t help but ‘pour one out’ to his music, resulting in liquid loss to our cups but we felt strongly that we needed to show this man some respect.

THE FUNK HUNTERS
Where’s the funk? Oh yeah…it was all wiped out when Nick and Duncan hunted it and put it in their record collection. I love The Funk Hunters not only for their originally produced music that literally makes everyone in a ten block radius want to dance, but for the live elements that they so flawlessly integrate into their show. Guitars, vocals, saxophone, trumpet, keyboard…even the occasional live drum set, whether it is the DJ duo or the live set, The Funk Hunters will always be number one.

GIRL TALK
Royal Athletic Park potentially tipped the Richter scale during Girl Talk’s set. I honestly wouldn’t be surprised if Seismologists received phone calls on Sunday evening. This DJ’s mash-ups are flawless and without fail keeps the intensity to level eleven – always. Way to go Rifflandia, it’s always a good call to end a festival with a bang! 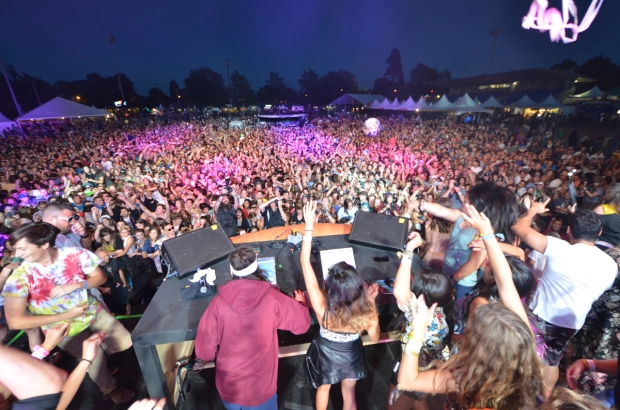 Lovely ladies from Music BC

1 Comment on Rifflandia Festival 2014: What We Love Through Words and Images!