This year I, along with so many other attendees, have fallen in love with FozzyFest. Growing from a small birthday rave in the forest in 2004, FozzyFest sailed the Alberta [...]

Defunk plays FozzyFest TONIGHT on the Forest Stage from 1-2am. Loving the fourth episode in the DJ/producer’s mini mix series The Funk Trunk. If you haven’t [...]

Festivals are places we go to lose ourselves – with friends, in nature, or to the music. Luckily for you, FozzyFest is one of those rare festivals that’s able to [...]

Some big sunshine vibes on what may be one of the last days of summer from this track courtesay of Slynk‘s debut album Frontyard Futon. The funky Australian teamed up [...]

We had such an incredible time at FozzyFest last year, we’re sad that we have to miss out on their 11th year, but want to make sure you all have a fun and safe time [...] 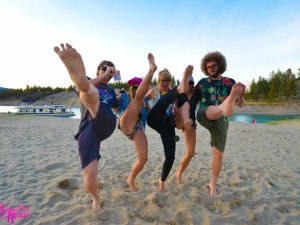 For the grand finale of our #tbt Real Talk interviews from the summer we have snow sport aficionados Skiitour taking the time to powwow at FozzyFest 2014. We chat with the [...]

We managed to commandeer one of Fozzyfest‘s amazing houseboats this year while interviewing Vancouver Island producer duo Hertz Donut about all things donuts, the [...]

We sat down with Atmosphere headliner JPOD the beat chef in our luxurious Jaguar Lounge to discuss his approach to DJing, the Project Intent Creative, his favourite food [...]

FozzyFest 2014 was one heck of a time! Check out the highlights reel from a small but mighty festival near Fernie B.C. Shot and Cut by Jim Vanderhorst – Aerial footage [...]