Year number 8 for Tall Tree Music Festival just got LIT with the incredible global lineup that dropped this morning at 9am. 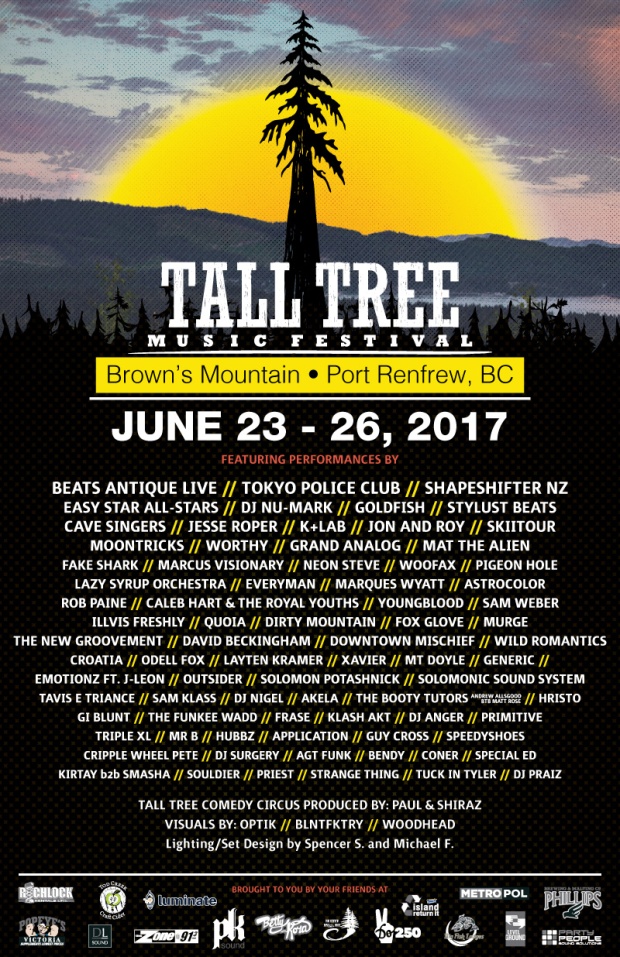 At the end of 2016, festival organisers asked the Tall Tree Festival community what they would like to see from the event as far as booking talent was concerned. Overwhelmingly Tall Tree was told that people enjoyed the strong Canadian lineup, however, wanted to see some higher tier acts that they may not be regularly exposed to.

“So we listened,” comments Mike Hann, Festival Director. “This year we are happy to say that we have talent originating from 7 different countries. The artists that are coming to Tall Tree in 2017 are billed on festivals worldwide, not just in Canada. We couldn’t be more excited for them to come and experience everything that is amazing about Vancouver Island and Tall Tree!”

Shapeshifter (New Zealand): Record-breaking New Zealand tours, scene-setting appearances at festivals like Glastonbury, The Big Chill, Big Day Out and Parklife, sold-out performances across Europe, worlds-colliding collaborations with Symphony Orchestras, multiple music awards, four EPs and five LPs — three with platinum sales — and an army of fans who return to relive the experience time and time again: the towering achievements of Shapeshifter, the future-shocked soul outfit who hail from Christchurch New Zealand, were built by a living, breathing band of musicians, with all the form-changing sonic possibilities live instrumentation offers.

GoldFish (South Africa): Their genre-defying mix of live instruments, House beats and searing live performances has seen Goldfish go from impromptu jams at a tiny beach club in Cape Town to headlining Amsterdam’s Olympic Stadium, cracking a top 10 on the US iTunes Dance chart, a residency at Pacha Ibiza with David Guetta and DJ’s like Fedde le Grand knocking at their door to do remix their tracks. It’s almost hard to believe that not very long ago they were just Dom and Dave, two music students who lived a relatively chilled life of surfing and playing music in their home town Cape Town.

Beats Antique (USA): Celebrating its tenth anniversary with its tenth studio release, the Bay Area’s wildly innovative performance dynamo Beats Antique emerges from the studio with a brand new album and stage show to mark the milestone. With legendary sets at some of the most iconic venues and festivals around the world and collaborations with superstars from Les Claypool to Bassnectar, the next chapter in the trio’s story takes them back to a mysterious world.

Easy Star All-Stars (USA): The Easy Star All-Stars have established themselves as one of the top international reggae acts since their live debut in 2003. Thanks to their best- selling tribute album releases, Dub Side of the Moon (2003), Radiodread (2006), Easy Star’s Lonely Hearts Dub Band (2009), Dubber Side of the Moon (2010), and Easy Star’s Thrillah (2012), as well as original albums First Light (2011) and Until That Day (2008), the Easy Star All-Stars have built a growing, dedicated fan base throughout the world, bringing together fans of reggae, classic rock, dub and indie rock into one big family. Since 2009, the All-Stars have played over 350 shows in over 30 different countries on 6 different continents, truly establishing themselves as one of the top reggae touring acts in the world.

2017 marks the eighth annual Tall Tree Music Festival held atop Browns Mountain in beautiful Port Renfrew B.C. Canada. Tall Tree Music Festival, one of B.C.’s premier music festivals rounds out its lineup with exciting and diverse emerging artists and established favourites. The three-day multiple stage and onsite camping festival is expanding this year with more capacity, vendors, activities and sponsors than ever before. Selling out in 2015 and 2016, Tall Tree 8 is expanding due to interest and demand from Western North America.