The eve of WayHome 2016 is upon us, and with headliners like Arcade Fire, The Killers, and a reunited LCD Soundsystem, it promises to be a doozy. If you’re unfamiliar with WayHome, it may be the best Canadian music festival you’ve never heard of.

Wait, what is WayHome?

Where the hell is that?

It’s basically a big ol’ grassy field with trees and a pond just outside of Barrie, Ontario.

About an hour and a half North of Toronto.

Oh. Why haven’t I heard of it before?

2015 was the very first edition of the festival, which wasn’t heavily promoted outside of Southern Ontario. In the Winter of last year, unendorsed rumblings started to emerge about a massive festival called “Home Away”. Rumours were flying–including a persistent-but-totally bogus one about Kanye West in the lineup—forcing a premature announcement ahead of the official one planned by the festival’s PR team and an imperfect rollout by the marketing team.

Right. So is it as big as the rumours said?

It’s pretty big. Last year’s festival had a daily attendance around 35,000. As a reference point, that’s about the same average attendance as Osheaga, Sasquatch, or Pemberton.

That said, the capacity of the grounds is 80,000 and the organizers are pushing the Burl’s Creek venue as “Canada’s largest outdoor festival and major event venue”. The Greater Toronto Area alone has such a significant population that WayHome could be on the way to becoming major.

Who are the organizers anyway?

It’s being put on as a joint venture between two promoters: Republic Live and AC Entertainment. Republic Live is a big ol’ white collar company, so unfortunately there are some corporate vibes (Molson, Smirnoff, and Reebok are major sponsors). AC Entertainment, however, is the company run by Ashley Capps—a music industry vet and co-founder of Bonnaroo. Capps remained a co-producer of Bonnaroo all the way until last year’s acquisition by giant Live Nation, ending Bonnaroo’s run as largest independent festival in the US.

Whoa. The guy stopped doing Bonnaroo and then started doing WayHome in the same year? So is WayHome like Bonnaroo North?

Well, when the info was first leaked about WayHome 2015 that’s the comparison everyone was jumping to make. It didn’t end up that way though. Bonnaroo has a long legacy and rich heritage of being, as Rolling Stone once put it, “the ultimate over-the-top summer festival.” WayHome 2015 was incredible, but living up to Bonnaroo means gargantuan britches to fill and WayHome hasn’t grown into its own britches just yet, so the comparisons aren’t fair. Apparently WayHome 2016 will feature a ferris wheel and a farmers market, so you can see the direction the festival is heading.

So there aren’t any similarities?

Probably the main similarity WayHome holds to Bonnaroo is that 80% of the festival attendees stay on the venue’s huge campgrounds, with all the hilarity and misfortune that ensues with large-scale festival camping.

There are a few other similarities (both WayHome and Bonnaroo have a barn and a silent disco, and the websites are similar) and WayHome did employ some Bonnaroo-esque flourishes—a play-it-yourself piano installed in a campground gazebo, hammocks amongst the treed areas—for instance, but WayHome succeeded based on its tremendous lineup, and not its bombastic vibe or supersized extra features.

I see. What is the “arts” part of the “music and arts” festival, then?

This is one of WayHome’s growing pains. The lines of giant medieval flags were a hit, as was the tree branch art that evolved over the weekend to become the afro of an elderly woman. Beyond that, though, there wasn’t much out of the ordinary to speak of, or at least anything to write home about. I’ll let this fenced sculpture of a hashtag called #nature speak for itself. Apparently there was an art walk, but you could only participate before 8pm on the Thursday (shows started Friday afternoon).

Were there any really shitty parts?

The most common complaints were the amount of water stations and the lack of mobile phone coverage. Do with that what you will. 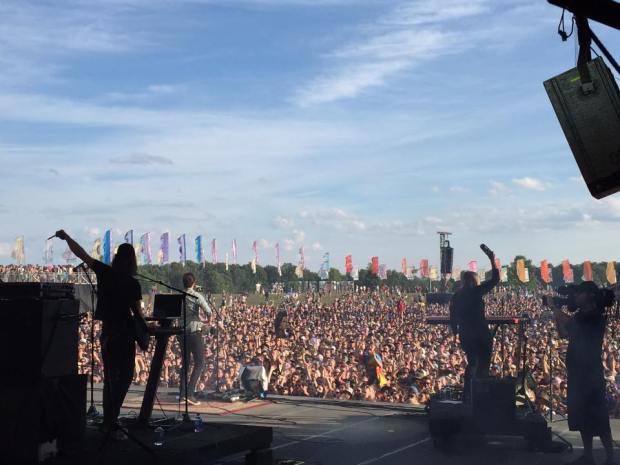 What were the best parts?

Oh, so many. WayHome 2015 included terrific sets by The Decemberists, Sylvan Esso, Gaslight Anthem, Rural Alberta Advantage, and Modest Mouse. Not only was liquor allowed to be consumed and carried anywhere in the grounds, but there were mobile vendors carrying around wagons of ice cold beer. Clutch. There was also an impressive array of totems, including some guy with a gigantic Phil Kessel head.

For food options, glorious Toronto food trucks were fantastic and plentiful. The large amount of trucks meant lines were short (yes!) but decisions were tough (no!). Can’t choose between Indian tacos and pulled pork poutine? It gets worse: there were three different poutine trucks, parked side by side.

On stage, the following is a ranked top ten list of the best moments of WayHome 2015:

9) Yukon Blonde rocking the socks off the crowd in the hidden, forested WayAway stage.

8) A scantily-clad fan somehow darting on stage to shake her thing with Danny Brown. Brown, ever the gamer, grinded with the woman for a song before handing her over to security. He later told the crowd to be alert because after his show he was planning to walk the grounds and cackled as he shouted “I might steal yo’ bitches! Watch out!”.

7) Kaytranada dodging a shoe thrown at him mid-set, halting everything to chastise the individual (“I’m not going to fuck around like that”), and then promptly continue melting faces.

6) Magnetic young Broods leader Georgia Nott absolutely slaying a set on the WayBold stage, and in pants that looked like they were stolen from Beetle Juice to boot.

5) St. Vincent (in a sassy pleather catsuit!) had some technical trouble. As the sound engineers worked out the kinks she strummed a gorgeous and unrehearsed cover of the Beatles’ “Dig A Pony”. Serene.

4) Neil Young’s several 12-minute guitar solos backed by Promise of The Real, featuring two of Willie Nelson’s sons, both of whom can effortlessly shred a guitar part themselves.

2) Kendrick Lamar hushing the crowd to silence over the course of several minutes with his finger over over his mouth, only to blast them into a frenzy by diving full volume into “King Kunta”.

1) Samuel T. Herring’s astounding late night performance as leader of Future Islands on what was their 999th show, connecting deeply with the crowd through movement, intensity, and earnestness. This may have been the best show all weekend.

Sounds amazing. What does the festival look like this year?

Who are the most intriguing acts?

There are some fascinating musicians on the bill. Here are the five biggest wild cards:
Third Eye Blind – Remember these guys? Do they still have it? Will they play the hits? Will anyone under the age of 30 show up?
FKA Twigs – She’s an enigma in the music industry. What does her live show look like?
Mac Demarco – Is anyone putting on more unpredictable stage shows right now than Demarco and his ragtag band?
A Tribe Called Red – What exactly is Powwow Step, you ask? If you’ve never heard these guys before, bring a shovel to scrape your brains off the grass.
BadBadNotGood –They seem to have carved out their own brand of jazz, but paradoxically they’re closely associated with some legit hip hop acts (most notably Ghostface Killah). Will anyone join them onstage? They’re hometown boys after all.

The campground areas have been rearranged to include a new, vaguely named 24 Hour Area. I’m imagining this is a response to complaints about some of the wild makeshift late night parties in the campgrounds, but I can’t imagine what will be happening in there in the wee hours.

Maybe the most unique aspect of this year’s festival is that all vendors on the grounds are attempting to go cash free. Instead of carrying cash or cards, you load your wristband with money electronically and swipe to purchase stuff. I can’t tell if this seems like a fantastic and innovative idea, a disaster in the making, or a diabolical money grab (what happens to the money on your wristband that you don’t spend?), but by the end of the weekend the answer will undoubtedly be clear.

Will there be an update after the festival to review the highlights and lowlights?
I got your back.