DGTL ENVY is a forced to be reckoned with. The DJ and producer has worn many different hats throughout his career in the industry, including but not limited to: Stage Director, Talent Buyer, Social Media wiz, Teacher, and Entrepreneur -all driven by his passion and affinity for music from a young age. DGTL ENVY (Connor Gaffney off the stage) is heading out on an exciting five-stop tour through the Kootenays starting today and was kind enough to share his pre-tour  thoughts with Team BK!

You’re about to embark on an epic *five* stop adventure through the majestic Canadian Rockies. Do you feel prepared for snow ball fights, potential elk encounters, and hot and sweaty wintery dance parties?

I feel ready for all the magical adventures that awaits me ! The first stop is March 9th in the wonderful town of Fernie British Columbia at The Northern Bar & Stage. Tons of my Fozzy Fest family are in the area so I am certain amazing times will be had.

The second stop is in March 11th in Nelson British Columbia at the legendary Spiritbar. This is one of my favourite places on earth, with the most beautiful humans on the planet. Of course a mass amount of my Shambhala family reside in the area, and that is just self explanatory. I will be riding White Water Ski Resort which has a 4 meter base and an abundance of fresh powder – I am super stoked.

The third stop is March 12th in the magnificent city Kelowna at Habitat. This is one of my favourite venues to play. I was the talent purchaser | social media director | graphic designer for the club between 2014 – 2015 and have so much love for the staff. They have recently upgraded the space with a PK sound system, which I am beyond excited to take for a ride ! The musical community and talent that is coming out of Okanagan is unreal. I am thrilled to shine some light on regional performers by curating the support of local DJs and circus performers including the western Canadian festival staple dance crew Cosmic Co Motion.

The fourth stop is March 13th at Big White Resort at Snow Shoe Sam’s. The booking agent for the venue (Bag – O – Beetz) is a close personal friend of mine who I admire and respect a great deal. He is extremely talented in his craft and looking forward to programming the dance floors with him for years to come. Biggie is also a fantastic resort to ride and look forward to shredding some pow with all my friends.
The fifth stop is March 28th at N.O Lounge in the astonishing northern city of Prince George. This was made possible by the founder of Awakening Music & Arts Festival (Nigel Rimmer). This individual has been an inspiration to me through his valuable technical, creative and management competency. A true pioneer, and I am honoured to be a part of his upcoming projects in the very near future.

For those who don’t know, tell us about Digital Envy Studios ? What do you teach ? Who’s it for ? What inspired you to start this ?

My most recent venture is launching a private post secondary educational facility focused on Music Production | DJ Instruction | Sound Design | Recording Arts. The top priority is to support the creative process and give you the knowledge you need to develop as a musician and artist.

Small classes allow our instructors to work closely with each student and give them the guidance they need to further their personal artistic growth. The wide range of music production and DJ programs are offered throughout the year, with flexible class scheduling. Finding the right option to suit you is easy no matter what your level of experience and | or time constraints may be.

Our focus is to identify the long | short term goals of the client and customize pertinent curriculum to achieve the artists educational desires. Attending DES will zero in on your aspirations and design a way of learning around your personality. Everyone has a unique way of learning – we are committed to finding it.

My mom was the main inspiration for this project. She always was a huge supporter of my dreams. 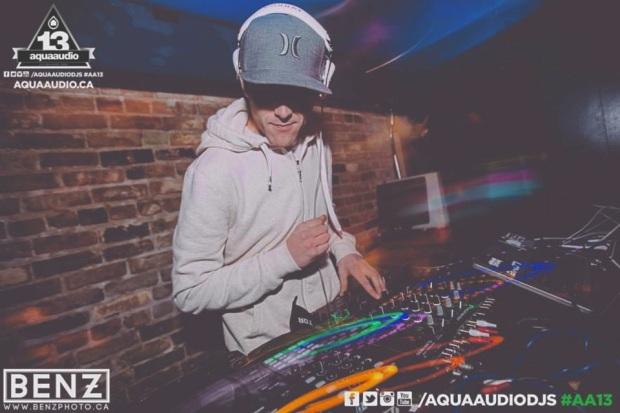 If you could create your very own musical flavour inspired skittle what would it be?

Ok – this is a rad question. The skittle would be black with three white stripes accompanied by a Adidas logo. When ingested, you would be equipped with a fully classic b boy tracksuit, complemented by and orange Kangol hat (think Jam Master Jay) It would give you the powers to bust a fresh break dancing routine to the theme song “Mama Said Knock You Out” by : LL Cool J

Have you ever experienced a random act of kindness at a music festival ? Where someone does something really nice for you for no reason at all.

Yes ! – I think back to Bassscoast two years ago in Merrit, Bristish Columbia. I was late leaving Kelowna, and had no time to pack a tent, gear or anything of use for the weekend. A wonderful group of strangers had adopted me into their family and had given me a place to sleep, food and anything I could possibly need for the duration of the festival. They have since have become very close friends of mine. I feel that music festivals are an opportunity to connect with other humans that are completely in sync with your personal energy. You are not for everyone. The world is filled with people who, no matter what you do, will point blank not like you. It is also filled with people who will love you fiercely. They are your people. Talk to the people who can hear you. Don’t waste your precious time and gifts trying to convince them of your value, they won’t ever want what your selling. Don’t align yourself with these people as it will likely inflict unnecessary wounds, which in turn will take precious time to heal. You are not for them and they are not for you. Sharing a path with someone is a sacred gift. Remember to take your time when choosing a team for your journey.

What part of the tour are you most excited about?

One of my main goals with the tour is to use the connections I have developed with artists in each region, to turn each show into a representation of that area’s talent. I have curated the opening acts for each date, and they’re artists I have developed a personal bond with over the years, and who mirror my dedication to music. There is nothing more fulfilling to me that giving other people the platform to express passions for their art. It is an incredible feeling, it’s what I live for.

What can we expect to see next from DGTL ENVY and DGTL Envy Studios ?

I have been confirmed to perform at multiple festivals this summer along with stage managing most of the ones I attend. A recent bucket list item I have accomplished is being accepted into the Shambhala Artist Relations team. I am very excited to be involved with such a hard working, and talented group of people. 2016 has been off to a great start, and I see no possibility of slowing down at all. I would just like to take the opportunity to thank every one who made this tour possible.