Music festivals; they’re an escapist experience sought after by pretty much every [wo]man and his dog these days. To leave the “real world” behind and fall into days that blend into nights spent dancing, laughing, drinking, and having a shower consisting of baby wipes while paying ridiculous amounts of money for a kebab – that’s what we do it for right? The music. Some people argue that it’s no longer about that; it’s the festival experience as a whole that revellers seek. Of course, those few days spent living in a tent and having a vodka orange for breakfast instead of corn flakes and the responsibility of adulthood are great, but there’s more. It’s the sweating it out on the side of a sprawling grassy amphitheatre, it’s the excited jump in the air when you hear the first few cords of that dope song, it’s the joined chorus of everyone singing along and throwing up their hands in unison that we all come to be a part of: the music.

Like all festivals, The Falls had humble beginnings as a one day event launched in 1993 and was exclusive to the Lorne, Victoria location before gaining steam and expanding its reach to Marion Bay, Tasmania and finally Byron Bay, New South Wales. Falls is the summer festival counterpart to Winter’s Splendour in the Grass, operated by the same promotion/production company, Village Sounds and Secret Service. Running since 2013, the Byron Bay leg of Falls Music & Arts Festival would be the backdrop of my 2016 new year celebration.

The North Byron Parklands where the festival is held has a sprawling natural amphitheatre. The Valley Stage, atop of a hill at the back of the grounds allows for a view of the stage no matter where you are situated. Walking into the grounds you enter a large open field, where on your right is a large canopy tented eating hall, and off to your left is the Forest Stage, surrounded by Australian bushland under a large tent. Throughout the middle of the festival are markets, vendors and a giant Captain Morgan’s pirate ship serving ice cold beverages and endless amount of shenanigans. Falls is a licensed venue therefore no outside liquor is to be brought onto the premises. Vehicle searches are conducted (although not always so thoroughly) and any alcohol found is confiscated. The challenge to smuggle in booze is one happily accepted by it’s Australian attendees and needless to say throughout the campsite and the festival everyone was having a very merry time.

The lineup for the 2015/2016 crossover was as impressive as ever, featuring Bloc Party, Foals, Disclosure, Gary Clark Jr, Toro y Moi, Courtney Barnett, Kurt Vile And The Violators, Mac DeMarco, The Maccabees, Leon Bridges, Wavves, Birds Of Tokyo, BØRNS, Gang Of Youths, and King Gizzard And The Lizard Wizard amongst many others.

There was a laundry list of acts from this lineup I had not yet seen so I was eager to cross as many off my list as possible. Many of these were Australian acts, and despite a few of them touring through Vancouver this year, the opportunity to catch them live had not presented itself until now. The Australian music industry is a healthy and thriving one, full of smack-in-the-face talent that deserves a worldwide audience. Since I’ve been living in Canada for some time now, I wanted our North American audience to be brought into the inner circle of what Down Under has to offer. 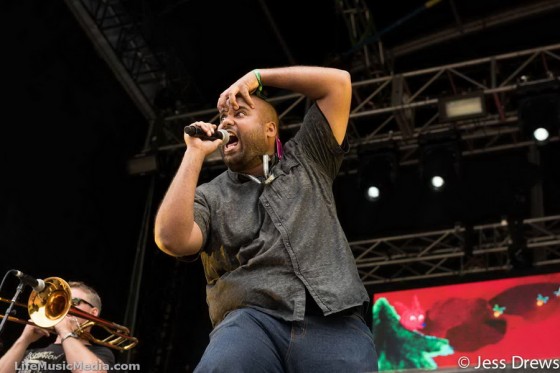 Bullhorn had the honour of kicking off not only New Year’s Eve but the entire weekend of the festival at the Valley Stage just after noon on Thursday. The nine-piece from Brisbane are a sight, and a sound you can’t miss with a dynamic drummer: a Californian expat MC by the name of Roman, and a seven-man horn section comprising of trumpets, trombones, saxophones, drums, and a sousaphone. Stylized as a “nu-wave brass band,” their energy and sound had me drawing comparisons to Five Alarm Funk. Their presence on stage was commanding but casual and MC Roman had the crowd engaged with a continuous flow of audience banter going, asking them for word suggestions (one was “funk”) to ad-lib an entire rap to. Bullhorn is a group that MC Roman proclaims is, “dedicated to the art of freestyle,” as the rap to almost every song is improvised right then and there. It was the hottest part of the day and the attendance of their set wasn’t nearly as much as it should’ve been. The people who decided sun-safety and drinking games are more important than seeing Bullhorn seriously missed out on a local treasure.

Meg Mac’s mid afternoon set at the Forest Stage, or as I like to call it “Soul Clapping 101,” was a great way to ease into New Year’s Day of the festival. After winning Triple J’s Unearthed Artist of the Year in 2014 the Sydney-bred/ Melbourne-based songstress has gone from strength to strength, releasing her debut eponymous EP in June 2015. Dressed demurely in black with a large sunhat, Mac and her soul-laden pipes powered through EP tracks “Every Lie” and “Known Better,” as well as two covers, with the crowd favourite being “Grandma’s Hands” and her Like A Version rendition of Broods’ “Bridges.” Australia’s love of homegrown artists was obvious judging by how packed out the tent had become and from the excited response to Mac’s gospel-esque anthemic track “Roll Up Your Sleeves.” Her latest single “Never Be” closed the set, reaffirming again the talent Mac possesses can’t be argued.

“This is the most talented band in Australia!” – Random guy in audience.

Watching Hiatus Kaiyote perform makes you feel like you’ve been transported back to a 1920s jazz club that’s been imported 100 years into the future, even though you’re standing underneath a giant tent and there are sweaty bodies everywhere. Living up to their “multi-dimensional polyrhythmic gangster shit” tagline, over the next 50 minutes you forget about those sweaty bodies and fall into the intricate musical transitions and breakdowns of the masterfully brilliant, grammy nominated future soul four-piece. Nai Palm’s deep and smokey vocals caress and carry you through each track that you can’t help but be in awe of. Each track feels more like a jam session than a structured song and the melting-pot of influences becomes clear as you listen to them play, gaining a real sense of how accomplished each member is. The grammy nominated track in question “Nakamarra” is how I discovered the band and is one of the last songs to be played along with latest single “Breathing Underwater.” They may not be the easiest band to dance to, but they win most FRESH for the weekend.

There is an audible buzz surrounding Gang of Youths in Australia right now. Their debut album The Positions is being hailed for its rock’n’roll honest look at a relationship affected by the diagnosis of cancer and the subsequent rollercoaster than ensues for both partners. A sizable crowd has formed for the five Sydney guys, again braving what is easily the hottest day of the festival, ready to hear their album favourites.  The nervous energy of frontman Dave Le’aupepe is endearing but distracting as he continually runs back and forth across the stage – mic in tow. Jumping down towards the barrier of people feeding from his exuberant somersaulting, at one point even rolling horizontally across the stage on an equipment dolly. They have the audience in the palm of their hands however, right from the start of their set which opens with “Restraint and Release.” Youths also decided to throw in their glorious Like A Version cover of LCD Soundsystem’s “All My Friends,” that injects the crowd with more effervescent lifeforce. Each track carries the band’s trademark slow-burner build up full hopefulness and recklessness, as exhibited in “Radioface,” and the impassioned crowd surfing single “Magnolia.” 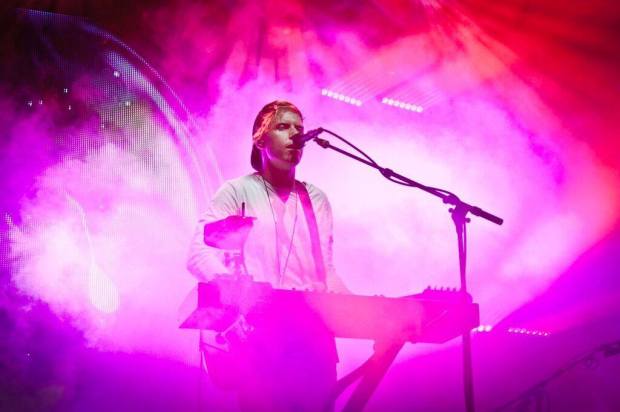 “I’ll take you further.” – Say A Prayer For Me lyrics.

RÜFÜS (also known as RÜFÜS DU SOL in North America) opened their set in a cloud of smoke, slowly building into hit track “You Were Right,” off 2013’s debut album Atlas. Bleeding into “Say A Prayer For Me” from their January 22 sophomore release Bloom, lead singer Tyrone Lindqvist’s vocals echo throughout the Valley Stage, “I’ll take you further down tonight // I’ll take you further, further,” a promise kept for the entirety of their pre Bloc Party set. The alternative dance trio melt from one track to another, creating one big dance party that has good vibes written all over it. They’ve earned the adoration of their Aussie audience with a knack for producing infectious beats, penning simple but catchy lyrics and a delivery that sends you into a dream like state. Girls are getting thrown up on to shoulders as “Like An Animal” reverbs out across the crowd, and it’s performances like this that have me wishing it was RÜFÜS who played the closing slot instead of Bloc Party. The humble trio had nothing but thanks to give for their excitable crowd, closing down with mood setter “Desert Night.”

Jarryd James had what was probably the sweetest crowd sing-a-long with heartbreak radio hit “Do You Remember” belted back out at him.

Mac Demarco’s endearing chit-chat between songs won The Falls crowd over, as did his crowd surfing and post show meet & greet. 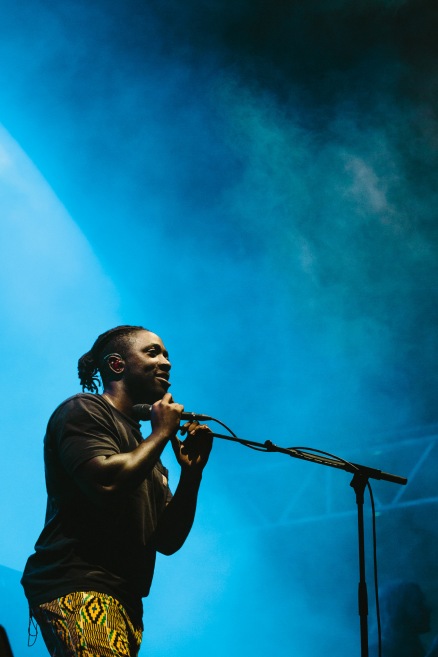 Not so stoked on:

Disclosure’s set needed to be louder and for a festival headliner, there shouldn’t be a vocal back track playing in your live set. Bring on tour a live performer to sing “Latch,” “You + Me,” “Magnets” etc.

Bloc Party, personally, are one of those bands who peaked around the time of 2008’s Intimacy, but I had hopes that their set and new material would still be worth seeing. It felt like they were just going through the motions however, and considering they have an almost entirely new lineup, they aren’t really Bloc Party anymore.

The Wombats were another band who were a little lacklustre considering they were the ones ringing in the new year. Party starters and all round top blokes Peking Duk should of had the NYE closing set.

With a solid few days of sun, vodka oranges, kebabs, and gorged on incredible music I returned to Canada armed with a bag of hilarious festival stories and a strong feeling of satisfaction with my Falls experience.