The music Gods have bestowed their love on California’s Lightening In A Bottle Music Festival who have just announced a very impressive lineup for 2016. 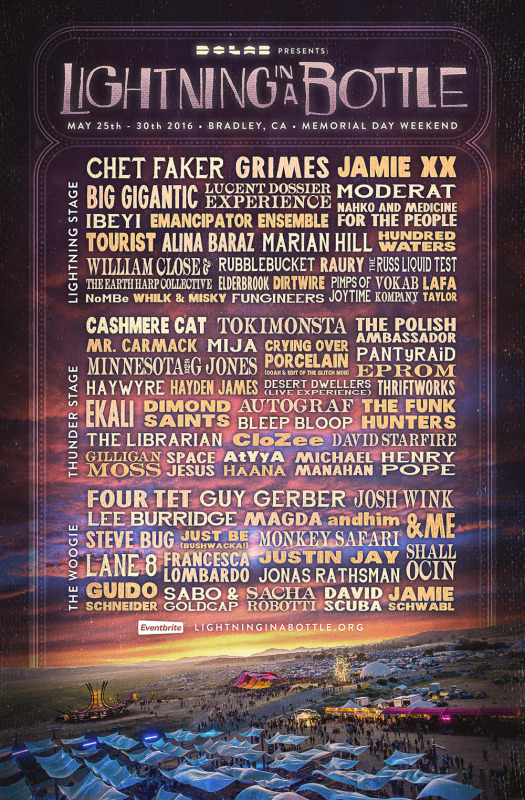 Now in full bloom in its 11th year, the Golden State’s premiere camping, arts, music and yoga festival, returns to central California May 25 – 30, announcing a world-class musical gathering that exudes the playfully aware ethos cultivated by festival founders Do LaB. Fans of LIB can feast their hungry eyes on some of 2016’s most progressive up-and-coming artists alongside an acclaimed curation of powerhouse acts, forming the most dynamic lineup Do LaB has unveiled to date.

The famed transformational festival has implemented a series of new additions. Opening its gates a day early on May 25th.

LIB 2016 will give Early Arrival Pass holders opportunities to explore community connections before the music begins. In addition, those who purchased the Early Arrival Pass on top of their four-day festival ticket, will have premiere access to the new High Grounds camping area and enjoy Wednesday/Thursday activities devoted to speakers, workshops, and yoga.

Following a very successful flash pre-sale and the earliest lineup release ever, passes for LIB 2016 are already 50% sold out. Tickets are available via the Lightning in a Bottle website – be sure to grab yours as Do LaB expects LIB 2016 to sell out ahead of schedule.  General Admission 4-day tickets are $270 with the additional Early Arrival Pass add-on for $75. Lightning in a Bottle is also offering a 4-Payment Layaway Plan for tickets until February 15.

RSVP on the LIB Facebook Event Page and be sure to stay in the loop with upcoming Do LaB news by signing up for the LIB newsletter.