The Anian Surf yard is a pretty unique oasis in downtown Victoria’s industrial district. The space is aptly named, it looks and feels like a friends backyard where you and your pals would shoot-the-shit and soak up the last few sunny days before winter, complete with a grassy area, barbecue and plenty of greenery. 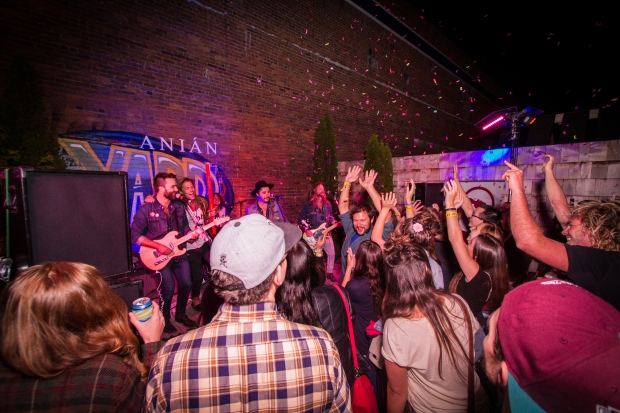 Paul Long (co-owner and clothing designer for Anian) envisioned the yard and his shop-front to be an inclusive space, and something that everyone could enjoy and feel comfortable in. Paul remembers the intimidating atmosphere of skate & surf shops during his younger days, being eyed up or ignored by rowdy shop hands and their friends.

“I don’t mind if my friends sit out and drink here, but they’re only allowed if they smile or say hello to anyone who walks by or might want to take a look around.“

Unwelcome is a word you won’t find in the Anian dictionary.

Party in the Yard –

The Anian yard holds about 150 people, and was a venue for some killer outdoor shows the past few years for Rifflandia Festival. The idea to have events showcasing local talent in the yard was part of the plan since day one.

Paul expresses some frustration with the struggle to get licences through the liquor board, and the delicate game a small business has to play with by-laws, noise restrictions, and the Victoria Police department to pull-off music and art showcases at their Discovery St. location. Undeterred by this, Paul looks forward to hosting many more community events in the yard this year, and great parties too. He constantly seeks to create a good relationship with his neighbours and the city to keep the good times rolling.

Paul is working on partnering with local restaurants and chefs in hosting dinners in the future, and is admittedly lucky to have Vancouver Island’s biggest brewer, Phillips, as a neighbour.

When it comes to programming at the yard, (other than the odd pool party) Paul admits that bands always seem to draw the biggest crowds. He also tells of how more often than not musicians are approaching him to get a slot at Anian, whether during Rifflandia, or any other time of year. Paul has a glimmer of a proud-mama in his eye when he talks about creating memorable and amazing experiences at Anian.

“I remember Sticky Fingers came up to me after they played during Rifflandia and told me it was the best place they’d ever played.“

This weekend The Boom Booms will be hitting the Anian stage – a band that Paul has really wanted to see headline in the yard for a while. Beyond that, Paul jokes that if he could get Wilderness Crew to play a set there, he could close up shop and call the whole thing worth it. 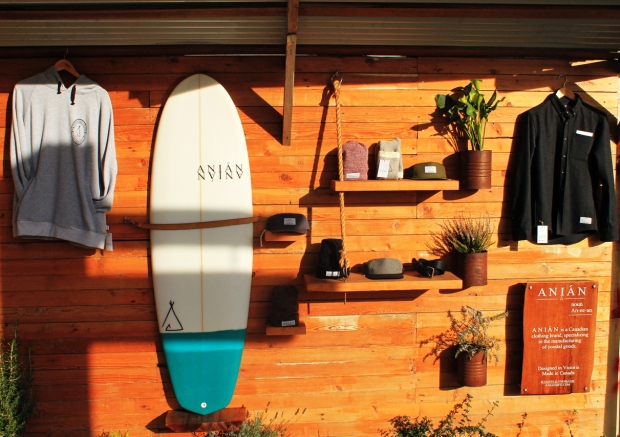 Brand with a Mission –

I asked Paul about any other brands he might look up to or be inspired by — he didn’t have any specifics but told me he respects anyone that aims to be true to their brand, and who take the time to make a quality product. Leka on Antique Row & Smoking Lily sprang to mind for Paul.

“Made in Canada is always key, I respect anyone who can work that way.“

Paul seems pretty proud that Anian has always gone in its own direction and is doing things that aren’t typically easy for a small business and a young entrepreneur to take on. Hosting events that work with other local businesses in a positive way, creating an inclusive atmosphere in a traditionally exclusive market, and doing it all in an off-the-grid and sustainable way. all things to definitely be proud of.

“I was kind of sick of seeing it done the same way everywhere.“

Paul also said he often looks outward for inspiration, whether from traveling (check out the Anian Travel Log) or from things they’re doing down the coast in Oregon and California.

This Saturday join Paul in his yard for a beer or cider, The Boom Booms and local designers Zaleska and Crow Clothing. Its Fall Funk, get your tickets online or in person from Anian. Here’s to one of the coolest venues in Victoria, keep on supporting the fellas of Anian!