The label, founded by ambassador of cool James Murphy and pals, has introduced the world to some really great bands. Each one has its own slightly twisted personality, and most are hard to pinpoint as one genre or another but rather mix several to create a unique and interesting style. The Rapture back in the day and YACHT of the past few years are just two examples of the world-class talent DFA has signed and published. The list goes on and on. Obviously not every band can achieve the same level of acclaim as LCD Soundsystem. But too often we overlook smaller names and as a result some true gems can pass us by. Such might be the case with Toronto-based artist Slim Twig, but this is a gem you shouldn’t miss out on.

Admittedly, I hadn’t listened to much Twig prior to a few weeks ago. To be honest, the new album “Thank You For Stickin’ With Twig” didn’t grab me on the first listen. It grew on me the more I played it, however, and a few songs in particular have been relentlessly stuck in my head recently. The production value is very impressive for music that is pretty lo-fi at its core. The songs have layers of instrumentation beneath the fuzz that might not be evident the first time, but emerge more and more as you get to know them.

It was a pleasure to be able to see the band in a small intimate setting this past Thursday. I had never been to a show at the Media Club, but got a solid first impression from the venue. The chandeliers scattered around provided perfect low lighting, and there was plenty of comfortable seating around the perimeter of the room. It was a perfect atmosphere to enjoy a delicious beverage before the headliner started. My one complaint was regarding the turnout – in total only about 30 people made it out for the show. I was expecting more, and felt that Twig deserved a better crowd.  The Media Club offers a sizeable dancefloor that felt empty prior to the show getting started. Once Slim Twig took the stage, however, frontman Max Turnbull politely insisted that everyone make their way closer to the stage, and the energy only increased from there.

The band didn’t waste any time getting things started. The first song came fast and heavy, as if to make sure everyone knew what was in store right off the bat. I was curious how the audio from the studio recordings would translate to a live concert. The answer was ‘extremely well’. The distortion sometimes reaches a level where it seems to be walking a thin line. It flirts with disaster but never overtakes the subtleties in the music. Every track is based in psychedelic Rock and Roll, but different influences appear from song to song. The first four spacy chords of “Textiles on Main Street” sound eerily similar to Black Moth Super Rainbow, but the song quickly changes to a playful tune that reminds me more of MGMT. The short interlude “She Stickin’ With Twig” features an orchestral sounding arrangement that is begging to be sampled by Justice. My personal highlight of the show was the rock anthem “Live In, Live On Your Era”, a song that Sloan is probably jealous they didn’t write first. 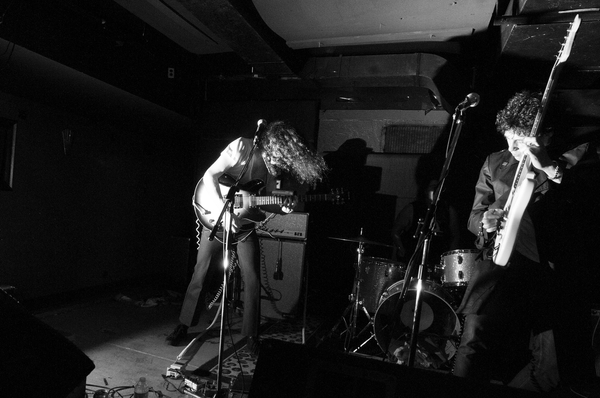 The music was great, but Twig’s attitude and stage presence was even better. I was a bit worried that the poor turnout might affect the band and make it difficult to put on the best show possible. In reality, if you couldn’t see the crowd you would never be able to tell the difference. Each member gave his or her all every song. There was so much head-banging and thrashing around onstage that the crowd couldn’t help but be energized. It became evident after a few songs that this band is made up of extremely hardworking and driven people. After the short but sweet set was finished, the band members took time away from packing up their gear to chat with fans, while also running the merch table. I was lucky enough to chat with Max for a few minutes and discuss the challenges of touring extensively without outside assistance. He explained:

“Where I play to a lot of people is if I’m playing a special kind of show. If it’s curated and promoted in a special way, or I’m opening for someone else, or I’m playing in my own city or in places that I’ve played a number of times. When I’m playing outside of my city or my province or whatever, I’m not riding any kind of press or internet buzz […] I’m just a lone person who’s creating records and putting them out to the world. I’m not funded by hype or anything like that.”

When asked about keeping up morale and playing with a lot of energy despite a poor turnout, he continued:

“I’m trying to guide myself to a place where I’m comfortable playing for whomever […] and getting my satisfaction from the playing of music, and the experience with whomever’s there […] I think energy goes both ways in a live setting. The band is feeding the crowd energy, and the crowd has the potential to feed the band energy back. When both those things are firing on all cylinders that’s a different story, and it becomes something else. But if that’s not happening I still think you can put out some energy for people that they can feel even if they’re not literally screaming for it […] You try and gear yourself up for that feeling. I’m doing a better job of that than I have in the past […] Regardless of how many people we play to, I’m having fun.

It certainly shows, and as a result it’s difficult not to have fun at a Slim Twig performance. I just hope the next one will draw a bigger crowd. It might take a little more publicity to do so, but since the band works so hard and has so much passion, spreading the word shouldn’t be too much to ask. Their natural ability and songwriting prowess are already there in spades. The library of music they have to choose from is growing, with critical praise to back it. The fanbase here in Vancouver might not be what it is in Toronto, but there’s no reason this can’t be improved upon. Slim Twig’s music is a little out there, and might not be for everybody, but it’s better to be somebody’s shot of whisky than everyone’s cup of tea.