Brooklyn Electronic Music Festival (BEMF) recently announced it will return for its eighth edition November 6th and 7th 2015. BEMF will again curate and host some of the most bleeding edge emerging live and DJ talent, alongside industry pioneers and icons, across multiple venues in Williamsburg.

Over the last eight years nightlife in NYC has migrated East, with Brooklyn becoming the epicenter of the storied city’s electronic music culture, and a true focal point for an entire spectrum of creative enterprises.

From showcases with seminal tastemakers like Fade to Mind, White Materials, and DJ Kicks, or exposing rising talents such as Route 94, Nicolas Jaar, and The Black Madonna since its inception, BEMF has provided a snapshot into the vibrant electronic music scene that has pervaded the borough, as well as a platform for its expression. 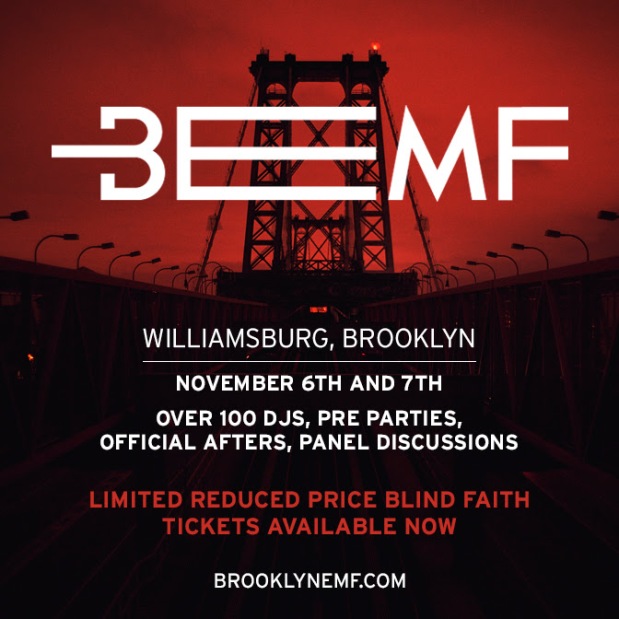 In addition to its musical programming, BEMF has sought to provide a forum for meaningful discussion on the issues facing the industry and today’s artists and labels, and will again team up with THUMP to host a free panel daytime series tackling these topics with the help of industry leaders alongside the festival’s talent for candid fireside chats.

In 2014, BEMF presented shows at over 10 venues in Williamsburg, playing host to 60+ artists and more than 30 events. 2015 will see BEMF further expand its programming while continuing to spotlight the very best of electronic music from niche sounds to established genres.

BEMF programming extends beyond the full on 2 day festival experience with pre-parties on 11/5, a slew of after-hours events, and a single day ticket offering for those interested in diving in for a night of adventure.

Limited early bird tickets are on sale now for $80– which provides access to all events, panels, pre parties and after parties. One night passes will also be available.