Shambhala 2015 was full of unfathomable experiences that both energized and enlightened attendees. The amazing artists, DJs, and dancers weren’t the only thing people couldn’t stop talking about days after the event. “Sunflower Guy” was on everyone’s mind. Who was he? Where did he come from? As I went on a search to find out who the man behind the flower was a thread emerged with statements like:

“[Haha] I remember him! When we were working enviro I sang to him on the megaphone!”

Numerous fans commented that he “made my day.” And then I found him, the man behind the flower: Kiefer McQuillan. I instantly fell in love with his quick wit, comedic undertones and huge heart.

Kalisi: It seems you have become a bit of a star after this year’s Shambhala! You brought joy to so many people and they are still talking about it! So everyone wants to know, who is the man behind the sunflower?

Kiefer: Hmmm, where am I from? I grew up on Vancouver Island but for some years now have lived out of my backpack using a thumb or bicycle for transportation. Shucks, I’m a Libra (simply, sun sign), my only real post secondary training was going to clown school – not to juggle but to relearn spontaneous play and how to invite folks into that, how to share space. I recently went for a lovely bike ride down to Mexico. I’m really just a vagabond about to settle down for a bit, each day at a time. I really love kalamata olives.

Kalisi: How many times have you been to Shambhala and when was your first year?

Kiefer: I’ve been to Shambhala four times now, I almost don’t want to admit it because the mystique will fade, folks keep saying they see me every year, maybe I’m an unknowing apparition. My first year was 2009 I think, I went three years in a row and just recently returned for the fourth. 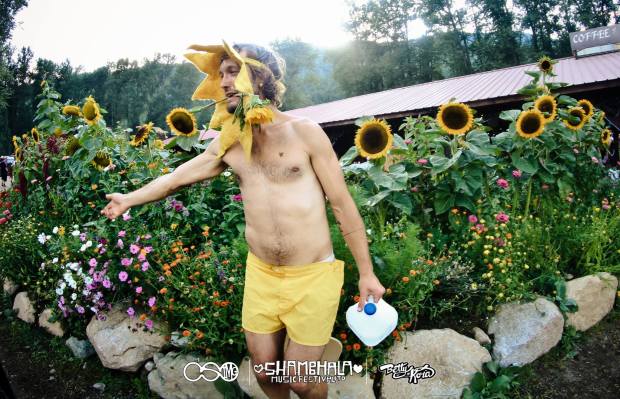 Kalisi: Where did the inspiration for the costume/performance come from?

Kiefer: Haha, I didn’t really have an inspiration for the get up, I just found that sun ray at a Sally Anne one day, I’m a bit of a thrift store rat, but anyways I found the sunbeam. As for the shorts… I have no idea, I just started finding yellow short-shorts all over the place, but not in stores, like in alleyways and free boxes, so I have a tiny collection but that pair is my fave. So, the costume made itself, I made a onesie for my first year, it was black and I sewed and glued stars and glow in the dark fabric on it so I could transition to the cosmos at night. As for the performance, well I couldn’t find my friends, was feeling kind of lost as to what I wanted to do. There just happened to be a chair at the garden, I didn’t move it over, so I stood on it to get a better vantage of the party and from there I don’t know what happened, it just escalated on it’s own.

Kalisi: How long did you spend dancing around the garden?

Kiefer: Only the sunflowers know that and they’re a tight lipped crowd.

Kalisi: What is your favourite memory of Shambhala?

Kiefer: I don’t really have a favourite memory, just the first time putting on the get up and seeing how it affected people. My best memories are totally interlaced with how people interact with me, sometimes this year people didn’t even notice me standing there when they’re only a few feet away, that was really satisfying for some reason, like I fully blended in. But over the years.. most people get a bit hysterical, I’ve had marriage offers, a lot of songs about the sun sung for me (“You Are My Sunshine”), a lot of people want to hug or spritz me or high five or take a picture, it’s really funny looking up and seeing people standing in the distance watching. The best thing anyone has said to me was, “You’re going down tonight.” Also, favourite memory now that I think of it is totally when those people came on stilts, that freaked me right out, just took me over the top and one of them was showering me in bubbles for minutes on end. It was borderline scary it was so unexpected but that’s the one. 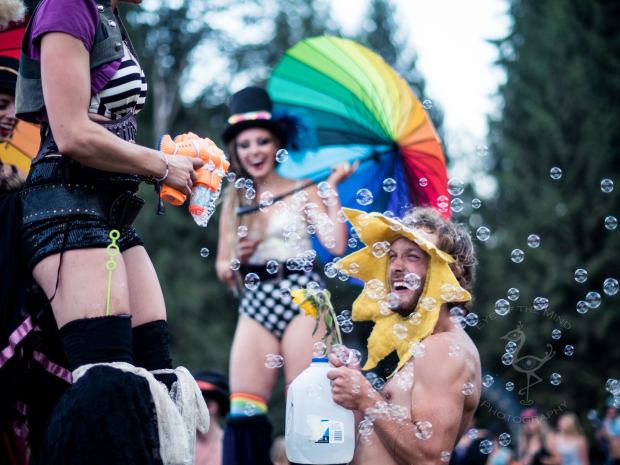 Kalisi: What was your favourite stage and act this year?

Kiefer: Shucks… I didn’t spend much time at any stage, I was making smoothies at night so I suppose I was at the Pagoda, the last night there had some great dancing. Can you believe that? I don’t have a favourite act, I didn’t even check the schedule before going… My favourite stages have always been the Living Room and the Grove.

Kalisi: It seems you have inspired others to dress up like flowers next year and joining your ‘garden’, what are your thoughts on this “bouquet effect”?

Kiefer: Haha, the idea of having a garden is hilarious. I think it’s sweet, you can grow anything in a garden so there’s still room for lots of variation. I hope everyone does something home-made though!

Kalisi: Will you be doing this again next year?

Kiefer: Oh next year..? Hmm, I hardly know what I’m doing a week from now.

Kalisi: It seems you have such a big fan base that others have have started a fan page for you! Did you know about this?

Kiefer: There’s a fan page now, that’s totally wild, I didn’t even know! I’m stoked everyone’s so stoked, what’s to say.. thanks everyone! Thanks for keeping up the spirit of play.

Kalisi: What do you want to say to all your fans out there?

Kiefer: To my fans haha, the pollinators, yeah my mind is blown. Just do your thing, like the Basement Jaxx song.

Thank you so much Kiefer for all the joy you brought to your many fans and for taking the time to answer my questions. We hope to see you at Shambhala next year and for years to come! Keep on spreading the Sunshine!! And remember that #bettyandkoraloves you!

1 Comment on The Man Behind The Flower: The Interview