This is a story about turning a disaster into a triumph.

Bad news seemed to be flowing through the air last week. A summer festival favourite, Ponderosa Music and Arts Festival was canceled due to wildfires in the Rock Creek area. In addition, we received word our dear friend Jon H of Fort Knox Five would soon be passing onto the next life. Following the weeks of his coma a dreadful uncertainty hung from our collective insides in the funk music community. Needless to say there was certainly a melancholy looming in the air.

As an eclectic group of artists, promoters, blogger friends and I sat up late last Wednesday night sipping spirits to lift our spirits, an idea was born. We decided as a group to try and salvage this downer situation. With the universe working in our favour an idea quickly came to life and less then 24 hours later we announced our first ever POP UP PARTY. 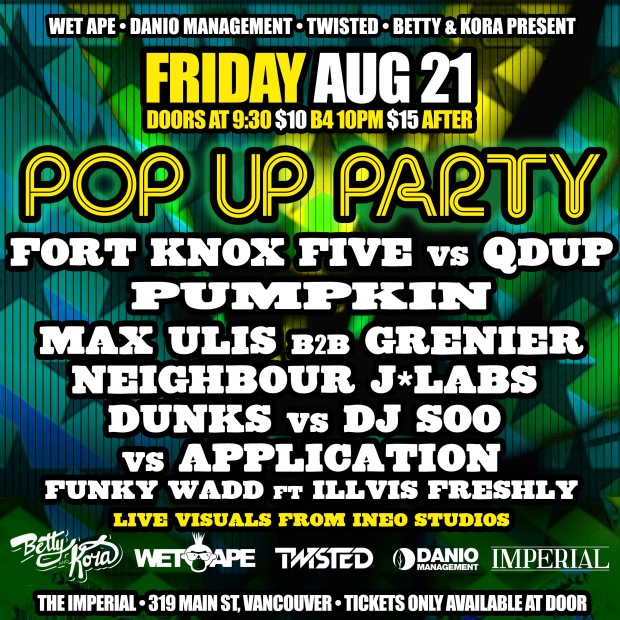 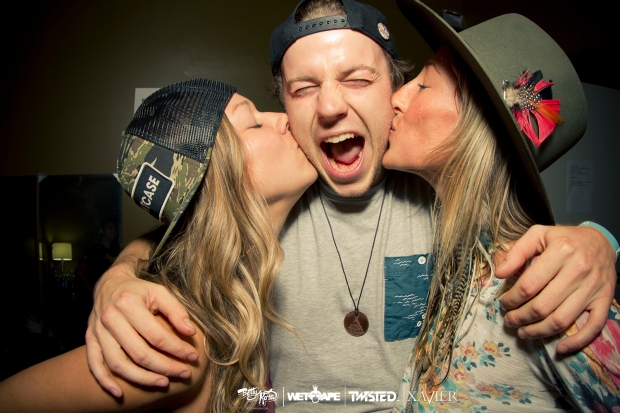 Wet Ape, Betty and Kora, Danio Management , Dunks (of The Funk Hunters) and Twisted Productions brought Vancouver one hell of a night. Fort Knox Five, QDup and Pumpkin played the headlining slots along with epic special guests: J*LABS, Neighbour, Max Ulis, DJ Soo, Grenier, Application, Xavier and The Funkee Wadd ft Illvis Freshly not to mention sick visuals from Ineo Studios. The pop up party GOT REAL POPPIN’!  The Imperial sold out, the music was unbelievable, and the vibes were at an all time high!  We couldn’t have been happier with the night as a whole. 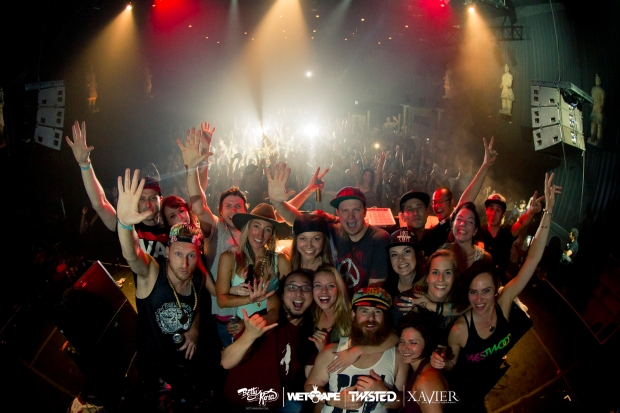 It’s truly special to see people want to love, care for, and lift each other up. We are grateful and proud to be a part of such an incredible community. Keep it up Vancouver… Keep it up.

Here’s what the headliners had to say:

“Friday night at the Imperial was one of the best nights we have ever been privileged to be a part of! It is so amazing to see a scene come together so solidly and pull off such an amazing lineup… especially in less than a day. Props go to all our talented friends, musicians and promoters for pulling off such a stellar evening… The music and raw support for us from our Vancouver crew, along side the party people who sweated and rocked the roof down, has really boosted our morale during these hard times. We return to DC inspired, with a renewed purpose, and wrapped in all the love our family in Canada has shown us over the last few weeks! Thank you to everyone for a show we will never forget… Love from DC to BC!” – Steve Raskin from Fort Knox Five 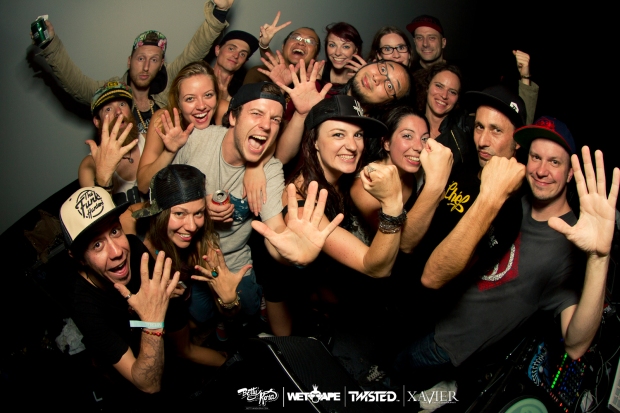 “I am so blown away by the response to this shindig. When Kora and Dunks called me in the middle of the night on Wednesday saying that Ponderosa Festival was cancelled but they were going to pull off a party in Van with just a little more than 24 hours of promotional time, I thought “why not.” I really had no idea that it was going to elicit that kind of response from the BC community. Such an outpouring of love and support for my fallen Fort Knox Five brother Jon H plus such a STACKED line-up equaled a sold out show and one of the best dance parties I have ever been to. With a true dream team at the helm of this event, I really shouldn’t have been surprised that it all fell into place so magically. What seemed like a crazy idea became a crazy good time just like THAT. I have so much love for my BC family!!” – Pumpkin

BIG LOVE TO YOU ALL! You are more than just our community you are our family

Words By: Kora | Edited By: Jones | All Photos By: Xavier Walker