There are times when we all think we’re a bit too tired to go out. Times when you think about your bed rather than the show you might have already bought tickets for, or the place you told your friends you’ll see them at. Then there are nights when it doesn’t matter how the fuck you feel because, oh my God KJ Sawka and ill.Gates are doing a battle set tonight.

A full-on freaking battle set between two controllerists, both renowned for having incredible talent. How could anyone miss this?! Presented by The Supreme Hustle, Boodang, and Wolfcastle, the Unsung Heroes tour landed on May 29th in Calgary, and I arrived to the party to catch Drop Cartel slamming the club with the some of the most gangster bass music of the night. Following them was the beloved Boh Nanza, who made his return to Calgary with this set. Greeted by a crowd cheering for his come back was obviously a great moment for him and throughout his set he kept a very personal connection to his audience. 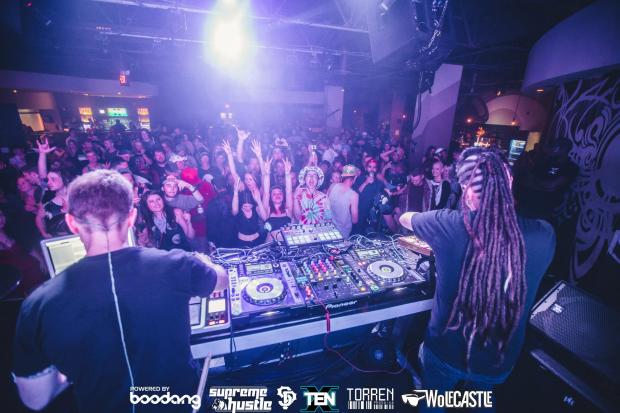 He started with a hip hop flavour, then turned the sound trappy and tribal – it was chiller than what Drop Cartel had been laying down. Complete with a happy partygoer poi’ing away in the corner, Boh Nanza’s melodic deep notes rolled over the crowd, perfectly leading to the intro of ill.Gates and KJ Sawka. I couldn’t have asked for a better set. KJ Sawka is the drummer from Pendulum (of which El Hornet and MC Verse played last month in Calgary), an iconic electronic band. His tastes during the battle were easily drawn parallel to the Pendulum sound, and you could hear the influence he must have had in his violent, growling tracks and aggressive drumming on the pad, which we were treated to seeing on the screen behind him. 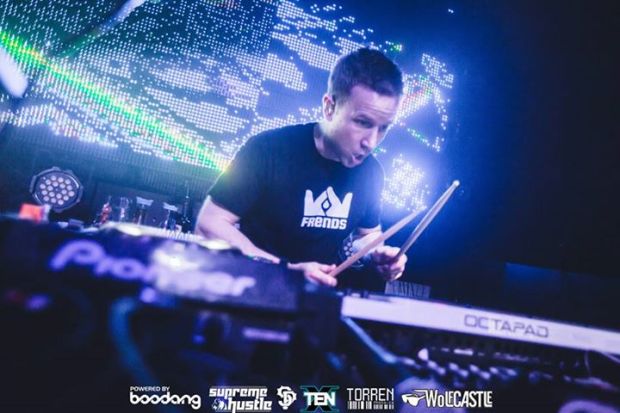 ill.Gates delivered nothing other than the stuttering bass annihilation we all wanted, with the really awesome hair we all expected. The well-known complexity of his sound was demonstrated perfectly tonight in his music, and besides the showmanship evident in performing a two-hour controller versus set, the team of two were also doing their own visuals live. The set was unreal – the collision of audio and visual mid-set (Breaking Bad references anyone?), the obvious joy on each of their faces when they dropped an extra delicious track, the appreciation you could so warmly see any time they were particularly blown away by the others talent, and the fact that they must have touched on every kind of bass genre out there. This is a show for the books and one that Calgary won’t soon forget!