Picture rollin’ down the highway in a in a forty-foot hippie-esque bus that has so much artistic character, bass and personality it’ll make your heart smile. It tickles your eardrums with the clear and crisp sounds of top tunes and coaxes your body into the best dance moves you’ve had to date. The bus includes thirty-two of the best people in tow to share this adventure with, creating so many amazing memories all in a single overnight trip.  Keep in mind that most of us were complete strangers before I conjured up this little road trip, but soon we’d all become great friends, dancing partners, wingmen and wingwomen, bearers of bragging rights to what would soon be for me, and I’m sure most of the attendee’s on the BassBus, one of the most epic road trips we’ve ever gone on!  Oh and the best part about this trip is that the beats were supplied by two world class DJs/ producers and great pals of ours: Adamallday and Taiki Nulight.

We were en route to Edmonton where our friends from the All Blown Up crew were celebrating their fifth birthday for the Act A Fool series in conjunction with their homies UBK.  This show was held at one of my personal favorite Alberta showcase venues the Starlite Room.  A multi-roomed, multi-leveled venue with a lot of character and music history.  Boy…if those walls could talk.  The headliner for this special occasion was none other than the king of downtempo tunes Bonobo, spinning an exclusive DJ set.  The bill was supported by some serious selectas; Taiki Nulight, Bleep Bloop, Moontricks, Knight Riderz, Saratonin and guests who all delivered show stopping DJ sets!  From house to breaks to drum’n’bass to bass music of all genres and back again –  you could hear it all at this show.  It was such a good time but it all seemed so surreal. 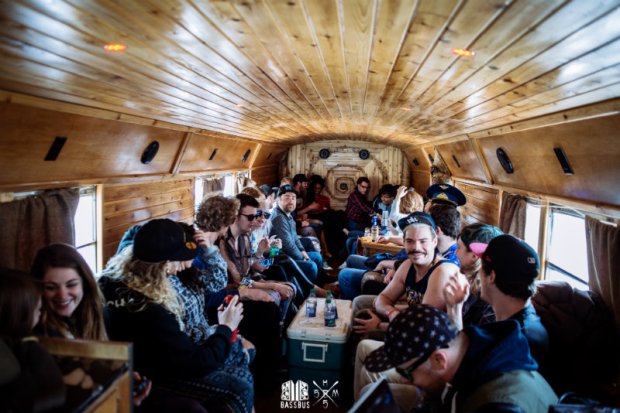 1:00pm –  I arrived at Sunnyside Station, an appropriately named BassBus pick up of course to meet our eager attendee’s and get this show on the road.  I get the call from Baran & Joel, “Ummm we’re gonna be a tad late… Closer to 1:30pm…” and I just laughed.  I’m personally in no hurry and with them providing some support to the Philosonic show the night before that brought Bleep Bloop to Calgary, it came as no surprise that the bus would be rolling in on schedule that was a bit behind.  I wouldn’t have had it any other way and no one even noticed.  Fashionably late is hip nowadays.

1:15pm-  Everyone is trickling in and the spirits are riding high.  We’re dancing around on the pavement and you can feel excitement in the cool brisk air.  People are introducing themselves and making connections (this made me happy).  Most of the attendee’s rested up on Friday night, or dialled it back to save themselves for this epic road trip.

1:30pm–  Our good pal Michael Benz, curator and director of all the goods Noctilux Collective shows up with Taiki Nulight and Adamallday who are spinning on the BassBus for us, unbeknownst to most of the attendees.  Word gets around really fast that this is happening.  We wanted to keep this hush hush out of respect for our friends in Edmonton that booked Taiki Nulight so we didn’t advertise it, but who the hell doesn’t love a cameo DJ appearance when they had no idea it was going down?  A pleasant surprise. Once reality kicked in and people knew that this was going down the excitement meter propelled itself to a new level- BASSBUS DANCE PARTY DEBAUCHERY!  Half an hour and we were on the road.

1:45pm-  Bleep Bloop shows up to catch a ride to Edmonton with us.  It’s his first time in Alberta and he says to me, “You’re all leaving me with a really good first impression and we haven’t even hit the road yet.” He was a super awesome guy to have along for the ride, fitting right in with everyone from the get go.  We made sure he was comfortable and well taken care of on this voyage.  You can catch him on The AMPitheatre Stage at Shambhala Music Festival this summer if you missed him in Edmonton.  King of what I like to call “Arcade Bass” and it’s truly his own signature sound.  If you’re at Shambs this summer you gotta make him a must see artist!  You won’t be disappointed.

1:55pm-   We load all of the party machines on the BassBus and get everyone situated while Baran and Joel set up the DJ booth and get the beats fired up.  Joel greets us all with an unofficial warm BassBus welcome and public service announcement and it’s time to hit the road 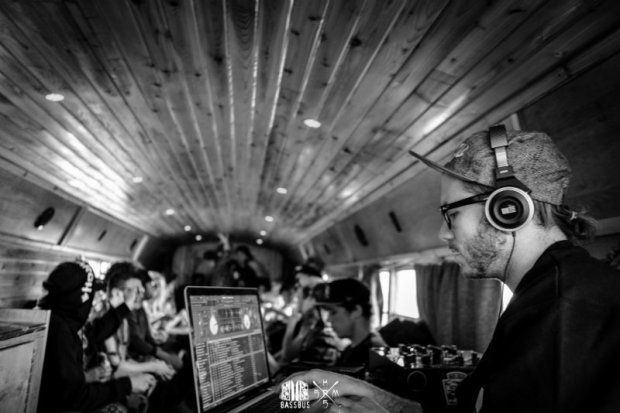 2:00pm – 6:30pmish-  We dance, we laugh, we hug, we indulge in libations, we story tell and take way longer than needed toilet/smoke breaks several times along the way.  At one point I’m almost feeling like a chaperone for this group trying to keep the stops to a minimum and group hugging everyone back onto the bus.  Wait a second.  We are all adults here and and I don’t remember any of you signing any waivers.  So I take a shot of Fireball and settle back into party mode.  Meanwhile Taiki Nulight and Adamallday are really lighting up the highway with their selections. Adamallday is throwing down bomber tracks like- “Imagination” ft. Katy Menditta – Gorgon City & “Right Here” – Rudimental (My Nu Leng Remix) and people are loving it.  It’s so crazy to have them both playing on this super rare journey.  We were very lucky to have those boys supply the beats.  Benz, Cody & Kieran all brought their cameras to document the trip too and I’m super grateful they did.  They got incredible picture’s of the trip, so thanks a million boys #nophotographerproblemsforus.

We arrive at the Chateau Lacombe in Edmonton shortly after 7:00pm.  What a superb hotel and the staff were all very accommodating and kind. The rooms were ballin’ and it was right across the street from the Starlite Room, but beyond us checking in, well let’s just say the hotel party is a whole other story itself. One I think I’ll save for next time. Road trips don’t get much better then that!  Keep your eye’s peeled as we might be doing this all over again in the near future.  I know I’m down.  What about you?