When I saw the CRSSD lineup, I was immediately intrigued. I’ve been a house music guy since I was 15…and this is what you call a stacked lineup with some of the best house, techno and live acts to come together under one roof since, well, forever. 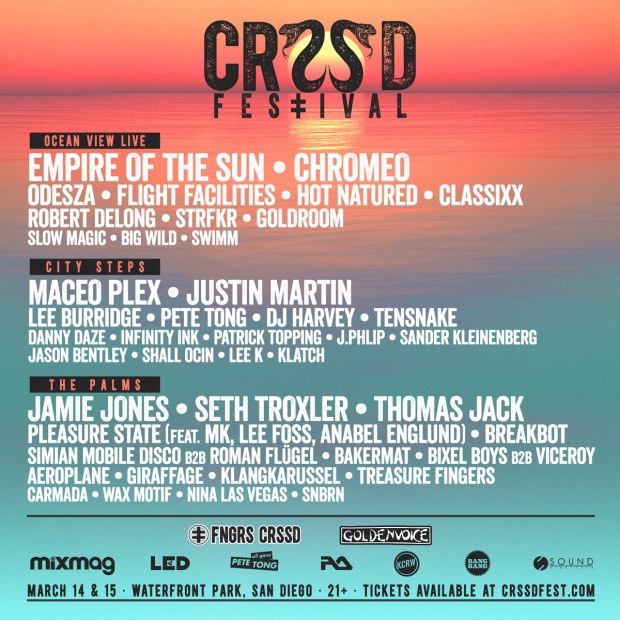 But then there’s something else.

You can call it nu disco, you can call it deep house, you can call it future house, whatever it is, it’s good, real good and it’s slowly taking over your speakers. There are artists that you may miss out on at CRSSD if you weren’t told to jot them down in your iPhone or check out their Soundcloud pre show. Aeroplane for instance – this man single handedly makes some of the best nu disco bass-lines in the business; plus his glasses are famous; Corey Worthington famous.

Simian Mobile Disco – these two alone are worth travelling to another city to see play and I would personally throw down a lot of money to see them by themselves. Imagine some of the best live dance music with insane builds and crunchy digitalismesque bass-lines, that’s SMD.

If you’re smart, you will not miss Maceo Plex. Eric Estornel has won awards for being the best deep house and tech house man in the biz; his tech house live, will literally change your life. He is one of the reasons I am traveling from Canada to CRSSD and should be one of your reasons too.

Thomas Jack is playing at The Palms Stage. This is pretty suiting. If you’ve never heard of his name, your girlfriend has and she’s probably already liked all his tracks on Soundcloud. The Australian wonder kid has created what’s known as ‘tropical house’; pretty much sounds like you’re on a beach 24/7. Get your sandals on.

Then there’s Sander Kleinenberg, the dutch mastermind who’s earlier stuff sounds like your in the best video game ever made and his most recent stuff, with interchanging melodies and synths will have you melting into the city steps.

Lastly a name I want to shed some of that dance light on is Breakbot; sound familiar? Thibaut Berland is a man who will make you remember the 80’s. His early 2000’s music showed countless hits on Hype Machine and later had an epic tour with Van She and PNAU in 2008. Breakbot will help bring you back to the roots of dance and keep you rooted the entire time. The above artists are just a handful of my personal suggestions of sets that you should not miss.

Let’s switch our focus to artists like Bakermat, Wax Motif, SNBRN, Klatch, Viceroy, The Bixel Boys, Treasure Fingers, Flight Facilities, CLASSIX and Goldroom. These are some of the hottest artists, who have come right out of the wood work, creating nu disco and that nu-deep house sound everyone has been craving like water in a desert. Coming at you from every angle with catchy lyrics, memorable bass-lines, soaring synths and heart melting keys, any of these discotheques will leave you breathless and wanting more.

Three major event promoters are in this musical cookie jar; Goldenvoice, Infamous & FNGRSCRSSD, all coming together under one roof to produce a memorable, momentous and eargasmic occasion. This 21+ event will feature a combination of live produced music and DJ acts, craft beer, a variety of amazing local food vendors and even a mixology program. The backdrop of this multi-venue festival sent from heaven is none other than beautiful downtown San Diego, California at the brand new Waterfront Park. The park opened in May of last year and is the perfect blank canvass for an event of this size. The highly anticipated CRSSD fest has been given creative reign to transform the park into something new and exciting; a location that will be remembered for years to come.

See you on Saturday, CRSSD.