On February 19th, the “Blood, Sweat, and Bass” tour smashed through Calgary and left total bass-head annihilation in its wake. Featuring artists like Dieselboy, Downlink, Apashe, and our own hometown hero Slim Pickins kicking off the evening, the night was packed with great music from the start to finish.

For those who don’t know, Slim Pickins is the man who spent years bringing Calgary bass freaks their weekly dose of dubstep and drum & bass, as the host of Supreme Hustle parties. Although the group has retired from throwing shows they continue to influence the scene through promotion and collaboration, and have had an amazing permanent effect on how we party here. Slim Pickins’ set was full of reggae vibes, thumping with drum and bass beats; a fitting atmosphere for the king of this jungle, who worked the crowd up to a good pace for an early start with Apashe 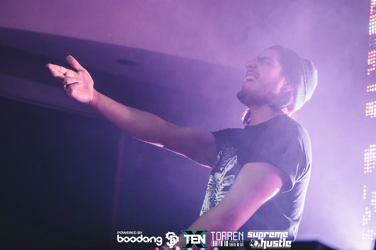 I was ignorant of this dude’s prowess before that night. Once I noticed Dieselboy on stage to announce Apashe, I moved myself to the front row to check it out. The mix was trap meets drum and bass, including lots of great well-known songs that kept everybody dancing with their friends, with the “I love this!” expression lighting up our faces. It’s not often that you go to a show and there’s nobody sitting down, but at this point it was true. Apashe totally killed it, and was a pleasant surprise for a lot of people. Everybody in there was dancing, and water bottles were in the majority of peoples’ hands as everyone had the rest of the night in mind.

If Dieselboy‘s mission is to make your fucking mind explode then it was accomplished. Beginning with one of his infamous cinematic intros, he escalated the mix into the Dieselboy overdrive drum and bass style that we were all there for, and kept the crowd going crazy. Pulsing bass to overwhelm our senses, the choking haze you can taste and feel at a packed show, in a suddenly-too-hot venue. The craft behind each mix that he hits his audiences with is riveting, somehow creating a hypnotic rhythm in the frenzy of his DNB chaos and turns into something you can’t tear away from. Continuously driving his crowd over the edg, this man’s sound can warp your mind the way a substance should, and if there’s any artist out there that I can guarantee will get me lost in their set, it’s Dieselboy.

Last, but most definitely not least, was Downlink. A Canadian-grown gem, this man has earned a place among dubstep royalty. As part of Rottun Records, a label that helped to propel the Western Canadian bass scene to a global position, Downlink has become one of the go-to names of the dirty, grimy dubstep that has become a signature sound in the last five years.

He was even rad enough to take time out of his day while on tour to answer a few questions about the craziness of the tour so far, and some of his current influences:

What’s a favourite moment from the BSB tour so far?

It’s hard to pick one specific moment as there have been a lot of great times. Maybe if it were just one moment I had to capture it would be seeing a guy front flip off a speaker into a raging moshpit at one of the shows in Florida.

What’s your favourite element of the BSB show?

I like the fact that both Dieselboy and I are playing on 4 decks and perform with an emphasis on the art of mixing rather than on production or stage theatrics.

What’s your favourite music festival to attend and to play?

Shambhala Music Festival. I’ve been attending since 2001 and can honestly say that it has changed my life and helped shape who I am musically.

I have been digging Algo‘s stuff a lot lately. You can check out his latest release the “Goon EP” on my label Uplink Audio to hear why I rate him so highly.

Who’s one of your favourite performers?

Skism, Crissy Criss, Dieselboy, Andy C, Megalodon are a handful of DJ’s that have impressed me over the years. There have been others but those names come to mind when I think of technically impressive DJs to watch perform.

The Blood, Sweat, and Bass tour is an event you can’t miss. Check them out in your city as they tour all over North America until the end of May!