Drum and bass has been my first love since I was introduced to electronic music some 13 years ago. So when I heard of Tribe, a major broken beat focused event in Melbourne, Australia, I had to go. The event was held at Brown Alley and featured iconic artists DJ SS, Grooverider, Andy C, and BC’s own The Funk Hunters with support from MCs 2HY, Lowqui and other artists such as Funkanomics and Crazy Daylight. Tey Evans and Shemer Mann are the men behind Twisted Audio and this event.

I first met Shem, whose energy and passion for music was obvious as he boasted about other local music events. His enthusiasm for community was apparent when he encouraged my friends and me to take part. When asked about Twisted Audio he was quick to thank everyone involved,

“We get a lot of help from our crew of tour agents -big ups Geoff-, DJs, VJs, MCs, promoters, decor crew, lighting and audio technicians. Too many names to mention but they are all an integral part of the crew, we could not do what we do and come to where we’ve come to if it wasn’t for our crew!”

The event started at 5pm, which is much earlier than I was used to since clubs don’t open until 10pm in Victoria, BC. We arrived around 8:45 and although the venue was very different from anything I had seen before (multiple levels, viewing decks, etc) I couldn’t help but feel a familiar vibe, one that I felt every time I would dance the night away at the late Hush Night Club.

These people, like myself, were music lovers! Right away my ears rang with old school bombs dropped one after another by DJ SS who was by far the highlight of my night. One of my favourites, ‘Shake Your Body’ by Shy FX & T Power, proved to be the featured song of the night as Andy C dropped it again later on in the evening. After his set SS hit the mic hard while Grooverider filled our ears with some hard drum and bass– my favourite track being ‘Tarantula’ by Pendulum.

At this point my seven Canadian girlfriends and I stood out like sore thumbs dancing up front, centre, moving our arms, legs and heads to the beat while the Aussie crowd kept their feet glued to the ground as they fist pumped and aggressively nodded their heads in agreement with the amazing tunes. 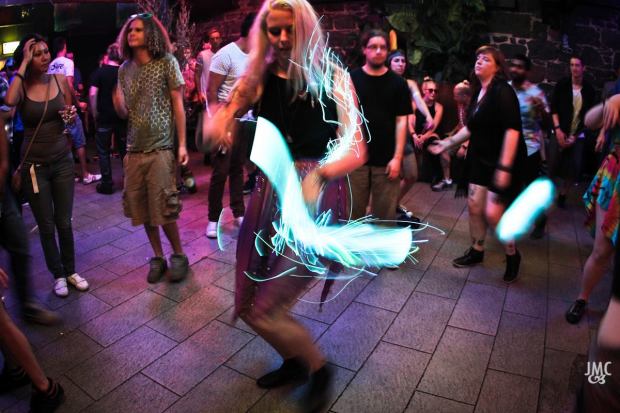 Up next were our hometown heroes, The Funk Hunters, who provided us with audio and visual stimulation and both started and ended their set giving props to the Canadians in the crowd and some sexy Hip-Hop tracks. Their performance, as usual, was full of an eclectic array of music from funky-house to drum and bass, and ended it all with a classic remix of ‘California Love’ by Tupac.

The rest of the night was filled with consistent bass lines on both the main and upstairs stages. At this point I was having flashbacks to nights spent at the late Jungle Room as sweat dripped from faces and walls due to dirty drum and bass beats.

Another feature was Crazy Daylight in the upstairs area, whose funky tunes made our bodies dance and groove while taking a smoke break–my favourite track being a remix of ‘Lets Dance’ by David Bowie. Andy C pushed us through the night with a mixture of hard drum and bass and some old school tracks– the crowd frequently cheered as he cued in some fan favourites. 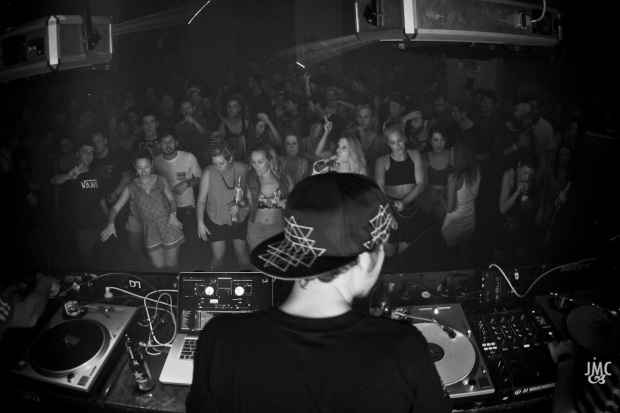 The only disappointment of the night were the multiple sound issues which occurred during The Funk Hunters as well as a long pause during Andy C’s headlining set. By the end of Andy C my feet hurt from dancing and my face hurt from smiling so much. It was an excellent time to call it a night and proceed with my posse to a local food stop for some munchies before bed.

All in all it was a fantastic evening spent with old friends, in an unfamiliar place with a familiar sound–the sound of bass, beats and babes. I attempted to thank Shem for everything during the show but because he is such a hard worker he was busy running around making everything perfect for his guests. So I say it now: Thank you Shem for showing us how a true team parties in Melbourne!