Govinda hit the city on Saturday, December 6th, bringing together a different side of the Calgary underground for a night laced with beauty, art, and road warrior fury. Brought to you by The Genesa Series, the Mad Max-themed party featured intense performances by The Genesa Project, the first ever back-to-back set between Jay Michael and Kylee Dawn, and an incredible violin/DJ set by Govinda, all the way from Austin, Texas, on his only stop in Canada. For those who aren’t familiar, the Mad Max movies are a post apocalyptic trilogy of films made in the Australian outback in the eighties. Fuel and resources were important themes to the series, invariably leading to long and intense chase sequences. The movies starred Mel Gibson and were made by the guy who later won an Oscar for Happy Feet, and there is a new movie coming out in the series next year starring Tom Hardy.

The stage design was a wonder to walk into – great white pyramids echoed around the National Music Centre, providing an excellently appropriate backdrop for the many equally well-designed costumes within the hall. Everybody in attendance had been counting the days down for this show, as evidenced by the obvious hard work that many of the greatly feathered and purposefully dusty shoulder guards, harnesses, pants, skirts and tops obviously took to make. Even the makeup and war paint that the crowd had covered themselves with was yet another great factor in what made the experience such a transformative one.

The Genesa Project, a back-to-back DJ performance by Genesa Series co-owners, Kali Yuga and Tanner Berry, were already on stage when I walked in. The dancefloor was lively and crowded, and the music was hard hitting yet melodic. The Genesa Project always brings an eclectic mix of harmonic and crunchy glitch hop, keeping the vibes energetic and snappy when they want to, and hypnotizing the audience at other points. Next up on the roster was Shambhala performer Jay Michael going back to back with Kylee Dawn, both well-known DJs that have helped to breathe life into Calgary’s underground rave scene. With a tribal, thumping style, their sound was heavy and lively with an easy flow, though it was missing the heavy psy influences that I had expected from them. Jazzy and funky sounds permeated both of these great back-to-back sets, with The Genesa Project providing the hype while Jay Michael & Kylee Dawn took us back down to a more primal heart-throbbing beat in preparation for Govinda. 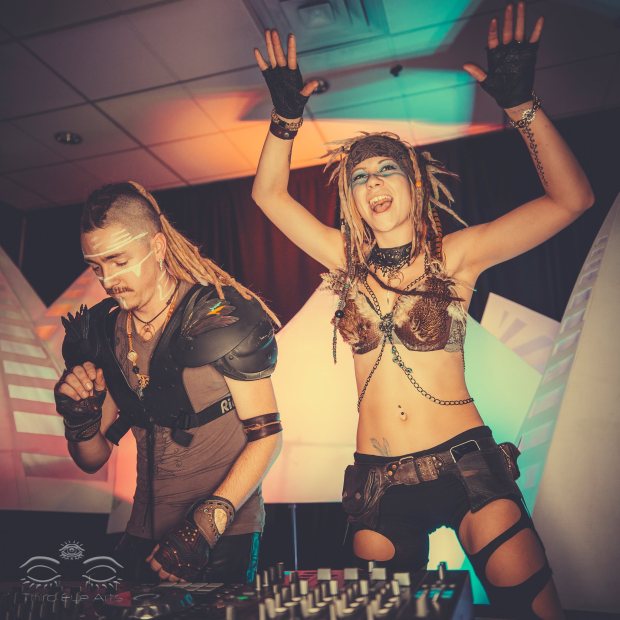 Last, but so incredibly and fantastically not least, was the man Govinda himself. Starting out with some hypnotic, deep lows, he began his loops and pulled out his violin. The crowd was pressing forward to watch, creating a wall of people in front of him all crowding forward to watch him perform. Quickly, he exploded into glitchier beats, broken rhythms highlighting the labyrinthian journey that Govinda was taking us on. Many artists think of their sets and mixes as stories, hour-long realities they can take you through. Govinda’s adventure was through the desert, up, over, and down the pyramids he played in front of, with the galactic sounds of his self-described gypsy dubtronica rattling through our minds. The writhing crowd was adoring his set, faces stuck in a trance around the room and his set took a turn for the more harmonious, with skittering bass backing his violin. Soon he turned to try out some of his new remixes, his sound growling through to morph the classics, such as Ain’t No Sunshine, and one of my all-time favourite songs, RJD2’s Ghostwriter.

Overall, it was an incredible night that everyone was excited to be a part of. The Genesa Series holds events that are heavily oriented with the community, oftentimes choosing the smaller venues for their shows rather than clubs and bars, and always enjoying a heavy attendance from flow performers, dancers, DJs, and promoters from Calgary. The family energy was vibrant, and wonderfully evidenced by the group hug that was called to end the night and celebrate Tanner Berry of The Genesa Project’s birthday. Thank you to The Genesa Series for providing a truly beautiful show, with such a refreshingly pure essence. 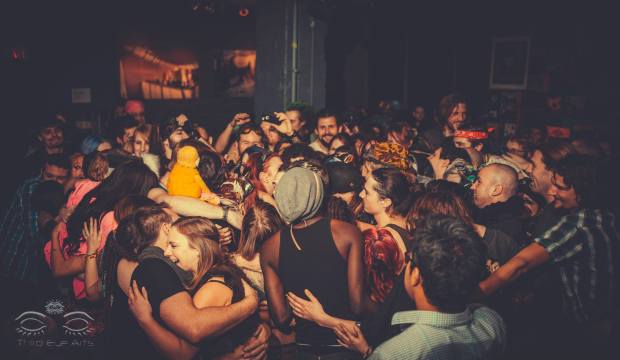