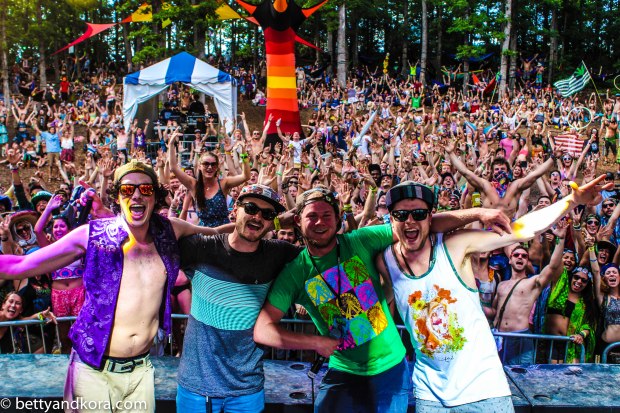 The Funk Hunters during their set on Saturday

Saturday. You know what that means? It’s Caturday!! Kora and I attempted to adorn ourselves in everything cat but it was so hot and humid we settled for t-shirts and shorts. Nick made a beautiful breakfast that most festival goers would have given their left arm for it was so delicious and we headed out to record the teams second set of the festival. Nick, Duncan, Cole and Dash put on a performance that James Brown would have been proud of. The energy was bonkers and the crowd was a mixture between funk and insanity. As Kora and I recorded their set, we were both so proud of our friends. I’ll never forget this couple who danced with whole watermelons and would periodically take a bite out of the side of the fruit and then pass it to someone else. It made me smile. 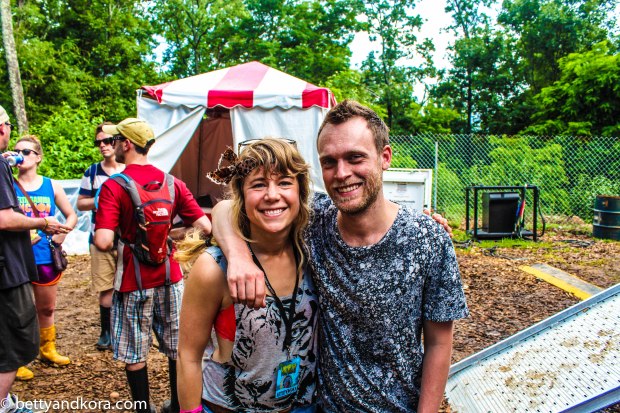 As the stage changed over I got to meet a man whom I have been a fan of for many, many years. Chris, the man behind Penguin Prison was next to play and we spoke side stage about his music, touring and how uncomfortably hot it was. He gave me permission to get up on stage and take some snaps (which I did) but I got so distracted dancing to the songs that have been a center point to my life’s soundtrack over the past five years I kept having to remind myself to take photos! Chris’s voice live was incredible and I couldn’t wipe the smile off my face. The crowd of people I was with made a collective effort to dance like penguins and blow bubbles at the same time. That hour, was one I will never forget. 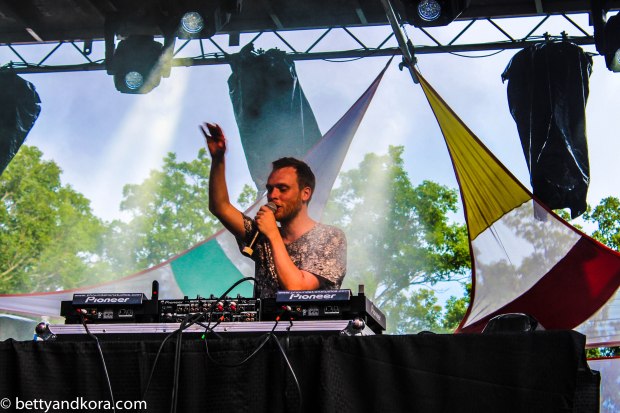 Miranda and I ran to the Main Stage to catch Edward Sharpe and The Magnetic Zero’s to meet Kora and the gang. We were all eager to see the dynamic without Jade on stage, as she had been ejected from the band one week prior. Although it was a little strange not having Jade’s presence, Alexander seemed much closer with the crowd. He jumped off the stage 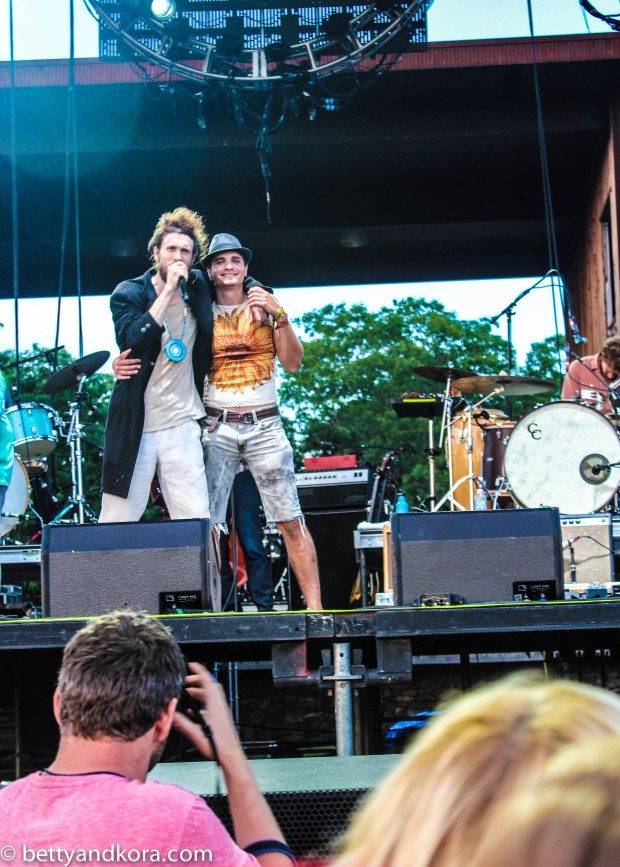 and sat down in the crowd and asked everyone to sit with him. It was a magical moment with some tearing up and others bursting with excitement end to end. And then something happened. Something that as a fellow music writer you don’t see every day: Alexander invited  our friend Tucker (The Festival Guy) on stage, sat down and passed Tucker the mic. Shaking from sheer emotion, Tucker told his story to an audience of fourty thousand about his experience and journey as a festival goer and app developer. He spoke all about FestEvo and with all of us crying like children continued to stand on stage playing the tambourine. Priceless. Absolutely without a doubt priceless. 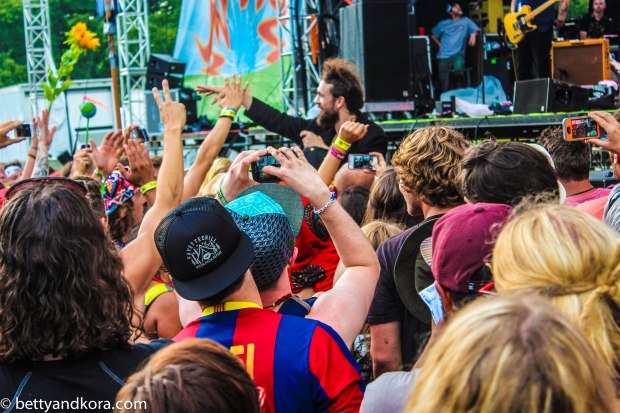 Alexander sitting with the crowd.

We all seemed to need a break after what was a true emotional blow out and sat down to watch The String Cheese Incident and then hit the artist hospitality tent for some gourmet dinner options. A few hours later and covered in leopard and bourbon, Kora, Nick, Duncan, Cole, Dash and I rushed off to BASSNECTAR and Boom Box. It got pretty wild and as we were making people get down on their knees and drink wine shots, we ended up meeting some of the members of Fortunate Youth.  Jordan, who we later deemed “The Best Man” and “Mayor of the Festival” ended up becoming one of our besties over the next 24 hours and who we love dearly. Somehow by the end of the night we were ripping around on golf carts guzzling BASSNECTAR’S tequila and getting stuck in the mud. BASSNECTAR’S sound and lighting at Wakarusa was un-parallel to anything I have ever seen before. You just couldn’t help but stand there in the sea of signs feeling like a little bug being drawn to the light. It’s like being hypnotized except you can’t really snap out of it. Boom Box was the same. These two glorious souls play the most incredible music. The tent was smoke machine filled 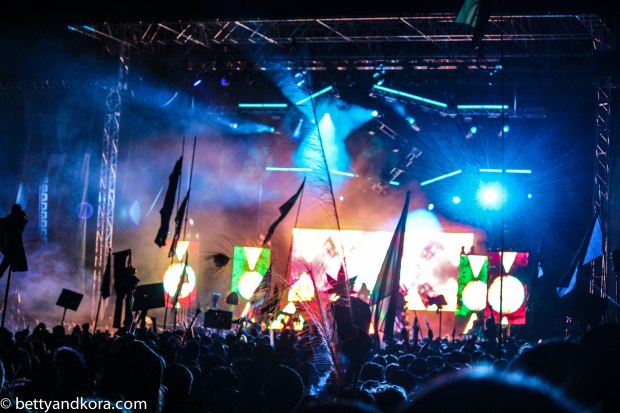 giving the allure that the members of Boom Box were from outer space and landed on planet Earth to take over with their killer beats. I wouldn’t be mad.

Sunday came and Cole made us all pasta for breakfast. We were all a little slow from the night before but managed to tidy the RV and snap our heads back in the game. We downed water but drank way too much coffee so I’m pretty sure it all balanced out. We opened the door to see the festival grounds swept away. Rivers cut through tents and thunder boomed over the mountains. We were thankful we had a roof over our heads and had remembered to pack rain gear. Coming from Vancouver, we’re usually prepared. We suited up for our friend Tyler (Stickybuds) set. We didn’t get twenty meters from the RV when our rain boots filled with water and our faces were rinsed clean. It was a crazy sight. Most people gave up and were wearing bathing suits and bare feet.  Watching Tyler DJ we were all concerned that the rain 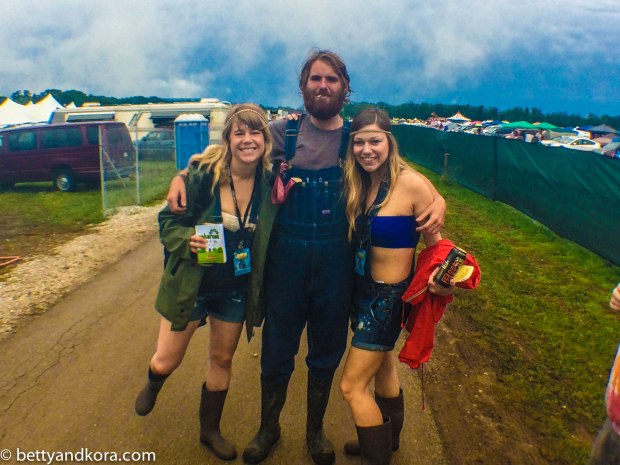 We found our man twin! Dressed for the weather at the least.

might interfere but he kept everything right on course. The audience was a sea of umbrellas and ponchos. People didn’t seem to care that there was a monsoon raging and danced in defiance of Mother Nature. I love that.

Following Tyler’s set we literally stomped through mini rivers and ponds to get to Fortunate Youth. We had met members of the band but had not previously listened to them. We’re huge fans now. Positive, reggae  vibes – they blew the top of the tent and had us at hello. A massive ensemble of people and instruments, I can only hope they play in Canada sometime soon. After their set, we gave them hugs and thanked them for a glorious musical experience. 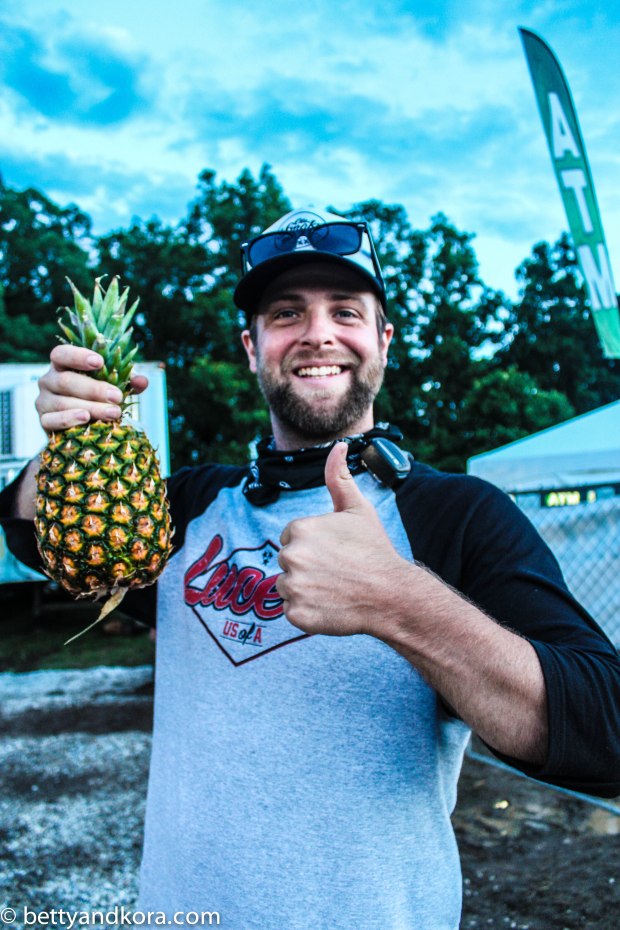 We were invited to watch Cherub’s set from the Main Stage. You don’t get many chances like that to stand in the background of a headliners moment of glory. We met an amazing community of people back there and looked out as thousands of people sang along to Cherub’s lyrics. Kora and I couldn’t help but laugh to  “Dosas and Mimosas,” 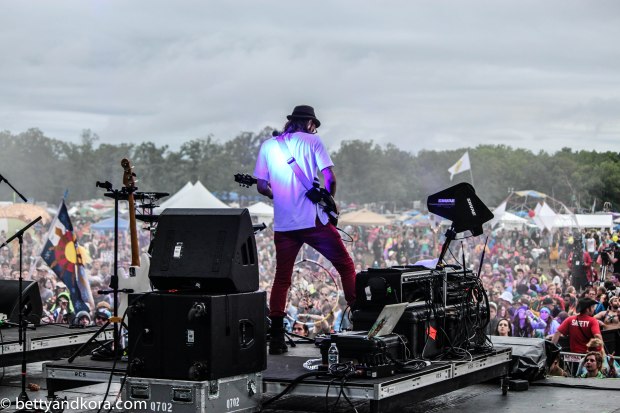 when they performed it…just listen to it and you’ll know what I mean.  After a time check we caught a golf cart to Poolside’s full band set. 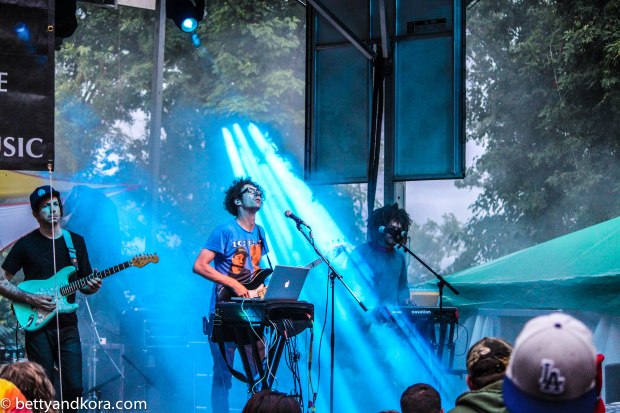 Now. This next part of our journey got a little wild, a little leopard and a little pool-side. We raced directly to Poolside’s set. Kora and I took some photos but couldn’t help but dance to a band we love so much. Phillip (lead singer) asked for whiskey on stage…Kora and I got that shit eating grin we normally get when we have a really, really good idea and decided we were going to offer Poolside some of our 20% wine/bourbon mix we bought off the wine vendor. 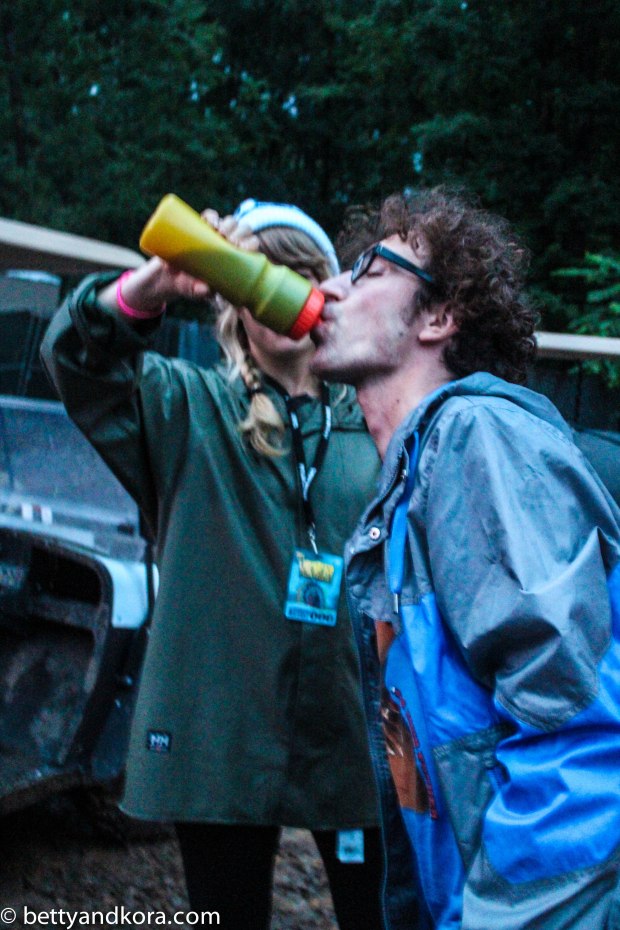 We hopped backstage and after their set we ended up no doubt drinking the wine. The crew invited Poolside back to the RV for a cocktail and ended up, in the end, draped in leopard print with leopard bowties, scarves and headbands. We did a photo shoot with the boys and fingers crossed those epically ridiculous photos somehow make it onto an album cover.  Our night ended with 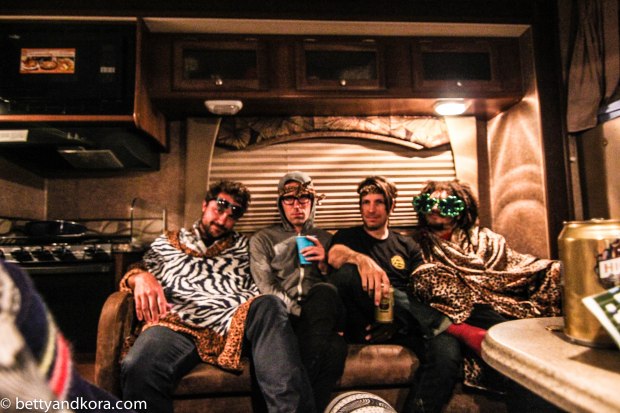 Our photo shoot with Poolside. It was Caturday all over again. Except better.

Poolside raging out to heavy metal hip hop and giving us a show that I’m sure no one on the planet will ever see again. Thank you Poolside. We love you to bits. Meow. 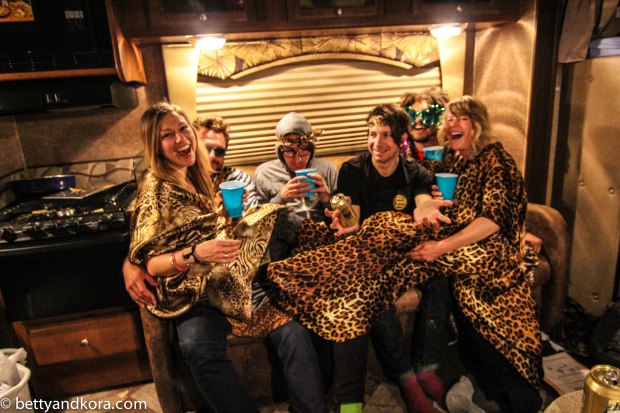 Betty and Kora jumped in as well. We love Poolside!

We took a break and later in the evening caught The Knocks followed by the John Butler Trio. JBT put on one hell of a show. Many people said it was arguably the best performance of the festival and we would definitely put it up there with many on our list. We’ve been listening to JBT for years, and it was fabulous to see them again. The tent was absolutely sardined and at moments you could hear a pin drop. It was that beautiful.  The night finished watching the Floozies where we said our goodbyes to our new festival family and exchanged stories and contacts. We headed back to the RV and called it a night.  We will be back Wakarusa for years to come. You know how to throw one hell of a festival and we love you dearly! 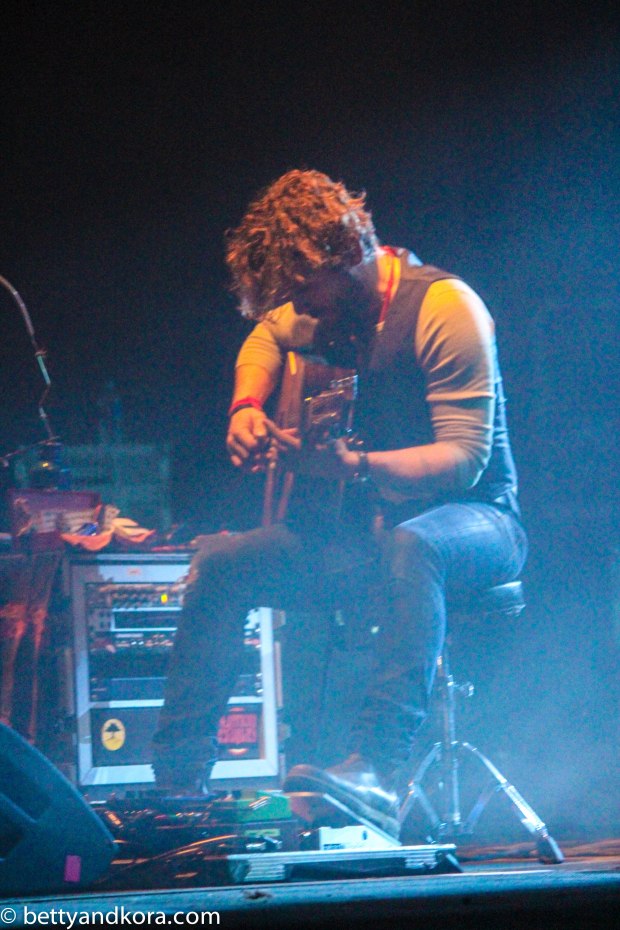