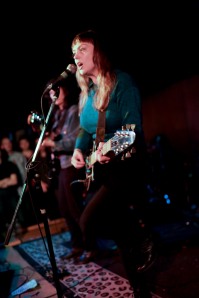 The dreary and drenching rain pelted the meandering line outside of Vancouver’s Media Club on Thursday, March 6, 2014. Staggered with the faces of multiple generations, it was starkly apparent that Olsen’s music has transcended the gap of past and present. To no surprise once inside, the crowd stood shoulder to shoulder, awkwardly shuffling and tiptoeing to find a sliver of visual real estate to claim for the night.

Angel Olsen with band members Stewart Bronaugh (guitar), Emily Elhaj (bass) and Joshua Jaeger (drums) are destined for big things. The Chicago-based singer-songwriter who previously visited Vancouver B.C. following her first album Half Way Home, has returned with three new members and a much bigger sound. Olsen quietly and humbly addressed the sold out audience saying, “I hope you get comfortable with each other,” and seamlessly began with “Unfucktheworld,” the opening track off her second album Burn Your Fire for No Witness. Olsen’s tragic inner dialogue expressed within her lyrics repeating “I am the only one now, you may not be around,” was devastating as she stood in front of a room full of strangers reliving a moment that was deeply impactful.

The second song off her new album,“Forgiven/Forgotten,” blended a punchy 70’s garage sound with punk undertones and is wildly energetic. The drums, bass

and guitars build throughout the song, supporting Olsen’s story of forgiving someone that she loves yet remains distant. The song culminates at the end with a chaotic chime of instruments in support of Olsen’s lyrics “I don’t know anything…but I love you.”

Breaking into “Hi-Five” later on in the performance exemplified Olsen’s dramatic vocal range and stylistic diversity. Reminiscent of Hank Williams, the rockabilly track makes loneliness sound almost cheerful, as if Olsen flourishes in solitude. The deep western drawl sneaks into “Hi-Five,” sombre at times yet almost comical with lyrics “are you lonely too? Hi-five, so am I.”

The performance was unequivocally vulnerable, sharing the loneliness and emotional heart break of Olsen’s life, albeit heroically. Her lyrics, possessed by a tumultuous past and a voice that can only remind one of Patsy Cline, Emmylou Harris and Joanna Newsom, is intensely powerful and haunting. There is no doubt that this lonely dreamer and powerful songstress is going anywhere but the top.