Head of the Herd , one of Canada’s top emerging bands, taking the number one spot on the Canadian Rock Charts in 2013, is set to play Victoria B.C. on Friday, January 17, 2014 at Lucky Bar (517 Yates Street) with guests MCM, presented by The Zone @91.3 and local music blog http://www.bettyandkora.com.

The Vancouver based blues-rock band recently completed their sophomore record “By This Time Tomorrow” with producers Gggarth Richardson (Rage Against Machine, Biffy Clyro) and Rick Jackett & James Black (Finger Eleven). Harnessing the energy of their live show, this record highlights the beastly,

melodic, storytelling prowess that is Head of the Herd. The first single, a duet with Jasmin Parkin from Mother Mother titled “By This Time Tomorrow,” has been used by the NHL & Hockey Night in Canada for a playoff montage, and as of late June 2013, the song hit #1 on the national rock charts. 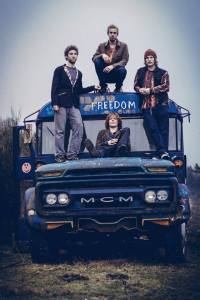 Head of the Herd has gained major accolades in the Canadian music industry, being named Fox Seeds winners, with previous winners including Matthew Good, Bif Naked and more. They’ve toured across the Country for Canadian Music Week, released music videos for their radio singles, played Telusfest, the Grey Cup Festival, and have opened for Guns n’ Roses, The Sheepdogs, and the Trews. Their debut single “Ain’t My Day” has been played on radio throughout Western Canada and online, with a video by acclaimed director Luke Hansen-MacDonald. Head of the Herd is modern blues with a hell of an edge, and they’re proud to unveil their sophomore LP, “By This Time Tomorrow.”

Tickets are $15 in advance and can be purchsed at Lyle’s Place and Ditch Records in Victoria B.C. or online at http://www.ticketweb.ca.

We’re stoked for this show! Betty and Kora Out!