Last Tuesday October 15th, Lydia Hol, one of this year’s top 20 Peak Performance Project (PPP) finalists played host to the “Songwriter’s Circle and iPod drive for Music Heals.” The smashingly successful event raised over $2000 for the non profit organization “Music Heals” not to mention the many MP3’s and iPods that were donated for the cause.

The evening kicked off with several artists rotating stripped down versions of their story telling tunes.

The adorable folk singer songwriter Hilary Grist (a former PPP finalist) had the crowd snapping away to her elegant vocals and enticing song “Chemical Reaction”.

Dominique Fricot (one of last year’s top 3 PPP finalists) grabbed the audience’s attention with a familiar quote “Nobody puts baby in a corner” from the racy, romantic 80’s film “Dirty Dancing”. His powerful performance of the song entitled “I Miss The 80’s” was a throw back to Jennifer Grey of “Dirty Dancing” and… well… lets just say your probably going to need to watch this one for yourself… #hilarious

(Video filmed and edited by Angela Stearns and her awesome film crew.)

As part of the theme “Music Heals” Head of the Herd’s Clayton Frank revealed that rather than writing a tear- jerker type of song when feeling down he chose to write a song about strength. Hence the inspiring blues-rock track “Knock me Down” was born. Later, Head of the Herd invited the beautiful and talented Miss Jasmin Parkin of Mother Mother on stage to perform their #1 single “By This Time Tomorrow”.

Clayton Frank, Neuman Mannas (of Head of the Herd) and Jasmin Parkin (of Mother Mother)

Ryan Guldemond of the indie-rock band Mother Mother, poetically spoke his truths, revealing to the audience a little glimpse of the soul behind Mother Mother. Special guests, Molly Guldemond and Jeremy Page, joined the lead singer on stage for an acoustic version of “Little Hands” a nostalgic track from their 2007 album “Touch Up”. 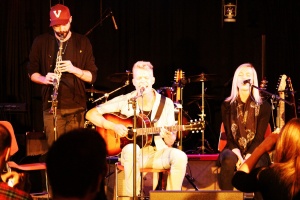 Deemed “One of the most dynamic new voices in Canadian folk music”, (Blues & Roots Radio) the sexy folk-songstress and hostess, Lydia Hol closed the night ROCKING out a full set with her band and special guests. Long time friends Neuman Mannas and Clayton Frank of Head of the Herd  joined Lydia for her SAUCY with a hint of SASS version of the Tragically Hip’s “New Orleans is Sinking”. Slowing things down a notch, Jasmin Parkin of Mother Mother accompanied Hol in “Bitter Heart”, a song so hauntingly beautiful it could literally make a grown man cry.

Hol’s event was a creative and refreshing way to give back to the musical community; a great cause, a unique songwriter circle, and incredible performances by all. I definitely give this event a double high-kick and hope to see more fundraisers like this one on the horizon from Hol.