Have you heard this girl? Her heartfelt, soulful lyrics and incredibly beautiful voice will take you back in time and melt your heart into a million little pieces of love.

Boats is the debut EP from BC-based songstress and raconteur Lydia Hol, and like a decadent dark chocolate or rich rye whiskey, the six songs it entails benefit both sonically and lyrically from a perfect balance of bitter and sweet. This young poet, storyteller, and multi-instrumentalist has a dynamic yet delicate voice that’s instantly engaging; that draws you in like a smoking chimney on a crisp winter’s night.

The release of her single ‘Bitter Heart’, a collaboration with local baroque-celtic band Thereafter named her a Regional Finalist in CBC’s Search for Canada’s Best New Artist.

A student of music and voice during her teens, Hol admits she was initially rather timid when it came to sharing that part of herself with others; however, an experience at a grassroots folk festival in her home province would alter her attitude and approach to her art. “When I saw that connection created between artist and audience, I realized I needed to take part in that,” she shares, and thankfully, she hasn’t looked back since.

Her craft has benefited immensely from her studies in both jazz vocals and English literature, the latter subject split between her home province and Dublin, Ireland. “That was a big turning point for me as an artist,” she says of her time abroad, immersing herself in the traditional folk music of the Emerald Isle. Upon her return to her native land, the guitar, mandolin, and bodhran player was armed with an array of refreshing musical ideas and began weaving her expressive voice into a tapestry of well-aged musical stylings.

“I’ve always considered myself more of a storyteller than a musician,” Hol admits, sharing some of her experiences of writing for Boats while sitting in front of her quaint cabin on the Pacific coast and watching the boats float by. Incorporating both traditional folk tales along with her own ornate poetry, Hol paints with her words and creates easily relatable perspectives. “My sole intention is to connect with my audience,” she says of her writing – “to have them swept away by the songs, lyrics, and ideas.” 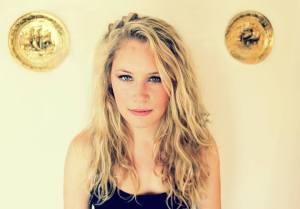 Those connections are strongest when forged from the stage. As a member of west-coast blues/rock outfit Head of the Herd, Hol is no stranger to the live setting; however, when performing her own material, the gifted raconteur likes to be at the very front of the stage, with her stories and inviting stage banter winning audiences over night after night.

Touring across Canada to promote ‘Boats’ has solidified Hol as a unique up-and-comer in Canadian folk. New material, recorded with Daniel Ledwell (Jenn Grant, Rose Cousins, The Weakerthans) will be released soon.

Make sure to swing by this amazing young ladies website and check her music out. Lydia will also be partaking in this year’s Peak Performance Project in Van City so when the time comes BE SURE TO VOTE FOR HER;)